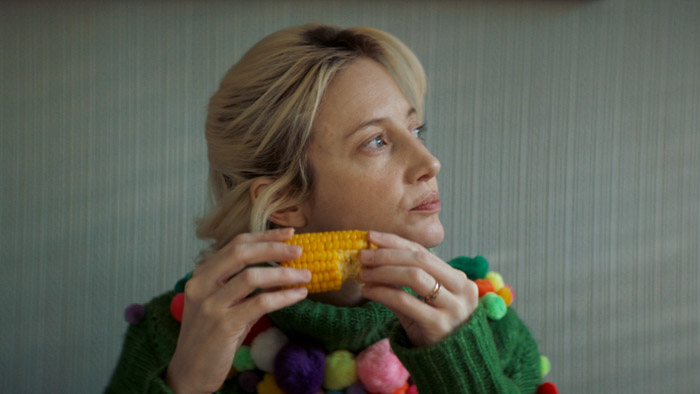 A haunting atmosphere engulfed with a sense of grief is everything in Irish writer-director Stacey Gregg’s unsettling thriller Here Before. Set in a damp and chilly suburb of Belfast, the story begins when a new family moves next door to Laura (Andrea Riseborough), a distraught mother who lost her daughter Josie in a car accident several years before when her husband was behind the wheel. The new neighbors’ daughter, Megan, resembles Laura’s deceased daughter.

Laura bumps into Megan (Niamh Dornan, blond, freckled and accommodating) while the child is waiting for her mom to pick her up from school.

Instead, Laura offers to drive Megan back home. And she starts getting a feeling that perhaps there is an uncanny connection between the two girls. Meanwhile, Laura’s teen son Tadhg (Lewis Askie) is a self-centered trouble-maker, who enjoys upsetting the apple cart. They end up going to an empty playground while Megan insists that she has been there before.

Melancholic Laura continues to hang out with Megan, although her mom (Eileen O’Higgins) isn’t happy with the situation. As an adult, she tries to stay away and maintain boundaries. But she then sees evidence that there might be a connection between the two girls – especially when she witnesses such signs as white feather drifting from the sky into her hand.

The cinematography does much of the heavy lifting as does the off-kilter musical score. As for Riseborough, she is able to smile through her tears while exposing her character’s vulnerabilities. For me, this movie brought to mind the equally tense Poltergeist when a family learns that their suburban neighborhood was built on a grave site and is beset with ghosts. Viewers will eventually realize that maybe Laura is onto something when Megan suggests she has a familiarity with their neighborhood. Something isn’t quite right and likely is very wrong, as the mystery, alas, is cracked open.