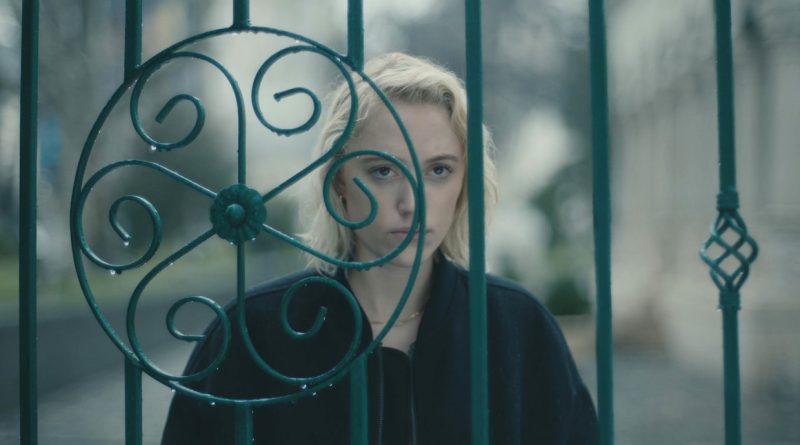 On the back of her celebrated 2014 feminist horror short Slut and the instant cult success of her “Storm Drain” segment in 2021’s V/H/S/94 anthology (Hail Ratmaa!), Chloe Okuno’s feature film debut Watcher which recently had its world premiere at Sundance has revealed a filmmaker impressively adept at traversing the differing subgeneric terrain of dark-toned film genres like horror and thrillers.

Starring Maika Monroe as Jules, the film traces her relocation to Bucharest with her husband Francis (Karl Glusman) who has to move there for work. While he busies himself with his new professional life during the day, Jules finds herself at a sudden loose end; alone and bored in a foreign city where she does not speak the language, after the thrill of sightseeing wears off, Jules discovers a much darker side to her new home. Inadvertently stumbling across a crime scene in her new neighborhood where a much-publicized serial killer has murdered yet another victim, Jules’s growing discomfort with the strange neighbor who spies at her through their adjacent apartment windows grows rapidly, compounded only further when she senses she is being followed. With no one to believe her, Jules’s sense of isolation only increases.

Although tonally very different from her earlier works, Watcher shares Okuno’s signature fascination with women characters in transformative moments when they realize the world that they thought existed is in fact very different from the world they live in. As Jules, Monroe packs a punch as the film’s central protagonist whose fear of what is happening to her evolves convincingly to a barely repressed, slow-burn rage when she discovers just how on her own she really is.

Using Bucharest as a backdrop compliments Jules’s sense of being an outsider perfectly, and the decision to not use subtitles for the Romanian language dialogue in the film is a canny creative decision, adding further to our alignment with Jules as neither she nor we (assuming we are not familiar with the language) are excluded from what may or may not be important conversations. Watcher is a dark, smart treasure of a film, with the collaborative energy of Okuno and Monroe very much at the heart of what makes it such a compelling viewing experience.