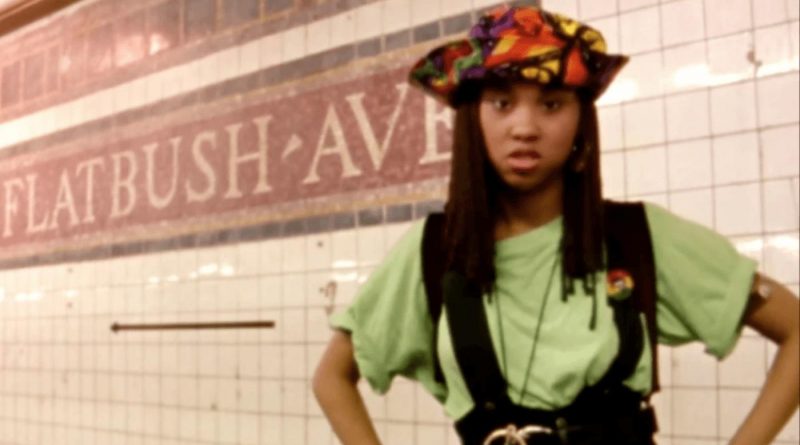 Feisty and fantastic, Chantel is much more than Just Another Girl on the I.R.T. And the film, written, produced, and directed by Leslie Harris is much more as well, shifting our point of view to that of seventeen-year-old Chantel Mitchell who has definite ideas about her future. She also has spunk, determination, and strength, along with an in-your-face assertiveness. Informed by Harris’ hours of interviews at the Brooklyn Teen Pregnancy Center, events express real-world perspectives and accompanying challenges. Issues include teenage pregnancy, abortion, HIV/AIDS, and, since Chantal lives in the projects, class. Race factors into every one of these areas.

Shot in 1992 in seventeen days, the energy of the shoot feels channeled into every minute of the film, racing along with Brooklynite Chantel as she interacts with other characters and the audience, directly addressing the camera. As she’ll let everyone know, don’t discount her dream to become a doctor even though she carries a heavy load: caring for her two brothers while her parents work, attending school full-time while earning high grades despite confrontations with authority figures, handling a part-time cashier’s job at a grocery store, and (at times) facing problems because of her angry, rebellious inclinations which some audience members have found off-putting. Nevertheless, in her struggles, Chantel’s cultural milieu comes to life through her clothes, music, dancing, and variety of interactions. To be sure, Chantel is her own person, a hard-fought identity that will indulge no push back. In fact, the initials I.R.T., standing for Interborough Rapid Transit, suggest Chantel’s intended sprint to a future different from her current circumstances.

As Chantel, Ariyan A. Johnson is as believable as she is charismatic, resolute, and confident. Echoing Chantel’s uphill battle with racism and sexism, the multi-talented Harris has not directed another feature film, despite her receiving special jury prize recognition at the 1993 Sundance Film Festival, in addition to other awards and nominations.