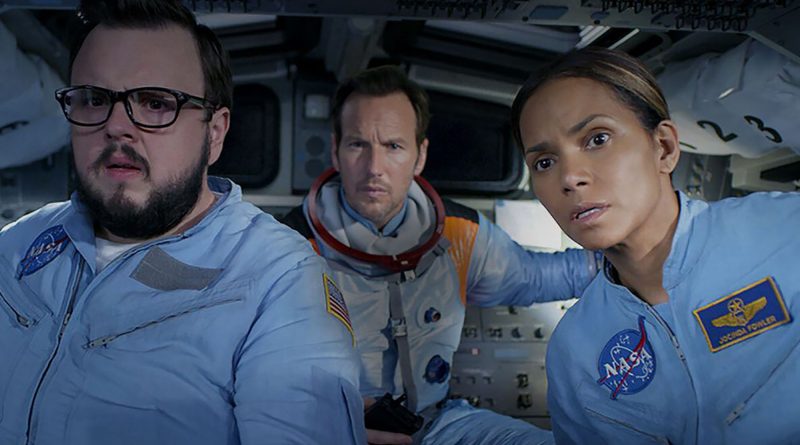 Hello, my name is Leslie, and I’m addicted to disaster movies. I have literally seen every incarnation of Airport, both Poseidon Adventures. I’ve even seen Beyond the Poseidon Adventure. For me, watching them offers the perfect cinematic mixture of schadenfreude, catharsis, and hope. So regardless of the fact that my chosen beat is to amplify the independent works of female filmmakers, I can’t resist a well-orchestrated apocalypse. For that reason, I’ve been very excited to see Moonfall, not least as a palate cleanser after watching the sad, appropriately alarmist documentaries that were my focus at Sundance 2022.

Moonfall is the new release from writer/director Roland Emmerich, nicknamed the Master of Disaster in Hollywood. Emmerich came by his name honestly, by bringing us mega hits Independence Day, The Day After Tomorrow, and 2012. These are three films I turn to expecting distraction, the thrill of CG, and bombastic speeches by predominately white dudes saving the world.

Moonfall is no different in that respect. It offers copious amounts of all three. You will not think about COVID for two hours unless the guy behind you coughs into your hair.

The story begins in Earth’s orbit, where NASA flight commander Jocinda Fowl (Halle Berry) is joking with longtime friend Brian Harper (Patrick Wilson) as he and a fellow astronaut do repairs out in space. If you’ve ever seen a disaster movie, you already know this space walk won’t end well. Something comes at the ship, causing wreckage and death, and destroying Harper’s reputation. He can’t prove what happened up there. Cut to 10 years later. Fowl is a NASA executive, and Harper is a washed-up loner scraping money together by doing astronaut appearances. But uh oh! Fowl and her NASA team have just discovered the moon is off its course!

Bearer of bad news and outsider geek genius KC Houseman (John Bradley from Game of Thrones), confirms that assessment when he tracks down and tells Harper, and Houseman has THEORIES about it. Theories you’ll hear about in detail if you see the movie. Regardless of why or how, everybody has about a week before the world ends, and in the meantime, the moon is going to wreak havoc as it circles closer and closer to Earth. We are talking 10+ magnitude quakes, tsunamis, and magnetic, swirling tornadoes full of moon debris that suck people up into them. Fowl, estranged friend Harper, and Houseman have to figure out a way to stop the moon from falling into Earth, so they can save their loved ones, which in this case include Fowl’s pre-teen son, Harper’s inordinately capable yet broody 19-year-old son Sonny (Charlie Plummer), and Houseman’s kitty and aging mom.

Emmerich leaves no subplot unplumbed in this fun yet preposterous, derivative, and badly-scripted mess of its own disastrous proportions. Alienated motorcyclist and can-do hero? Check. Awkward geek and wanna-be astronaut committed to saving the day? Check. Plucky, no-nonsense female expert who does lots of stuff but isn’t the actual hands-on hero? Check. Second husband who is totally in the way but means well? Yup. The list goes on, as do other random subplots, and don’t get me started about the white savior element of this movie. I can’t even…. Why couldn’t they make one of the two main guys anything other than pasty, fluorescent white? For that matter, why couldn’t they have subverted the alienated loner dude trope by giving it to Berry to play instead of Wilson?

Emmerich’s ridiculous yet compelling former hits are classics because they build characters and anchor them in a believable foundation, while their lives and the world is falling apart around them. He didn’t do that well enough in Moonfall. Missing as well are great one-liners like those he wrote for the heroes in Independence Day and 2012. The dialogue is so silly sometimes (and not in a good way) that you could hear the audience laughing in unison.

That’s not to say that it’s entirely unredeemable. I was definitely distracted for the duration, and it was great seeing Halle Berry in this kind of role. There are also a few impressive moments of CGI, and one cute joke about a cat.

Will I see it again? No, and I’m such an easy mark, that’s the surest sign Moonfall doesn’t make the grade. There are so many aspects that feel Frankensteined together from Contact, 2001, Deep Impact, Emmerich’s own works, and other sci-fi and disaster movies, that I can’t imagine watching this instead of any number of them. Still, I know the mix of schadenfreude, catharsis, and hope is exactly what many of us need to get us to March, or the end of the pandemic, or the next variant, or whatever disaster awaits us here in reality. See it if you think some floods, earthquakes, and plucky heroes might help you do that, but you’ll need a suspension of disbelief as big as the moon.