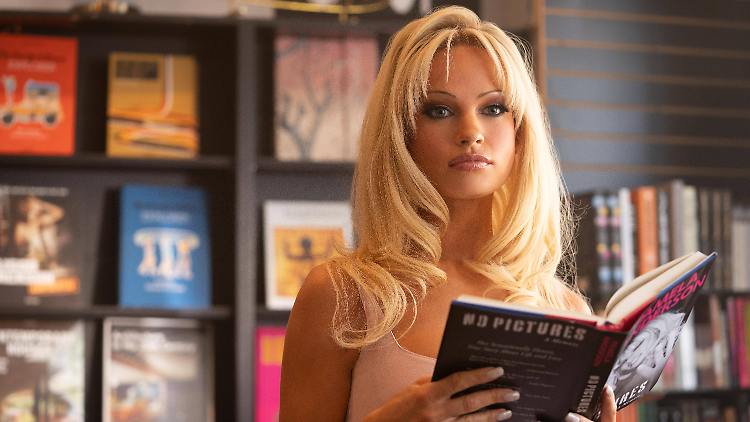 The whole point of the saga related in the new Hulu miniseries Pam & Tommy is that Pamela Anderson’s life was upended when intimate moments between her and new husband Mötley Crüe drummer Tommy Lee, captured on video for the couple’s own enjoyment, became the original sin of sex tapes.

Over eight episodes, she and Lee, but especially she, are humiliated, shamed, and made the butt of jokes. It’s agonizing to watch at times and in interview after interview leading up to the series Feb. 2 release, various people involved in the production have made the point that Pam & Tommy exists to right a wrong. It never seems to have crossed anyone’s mind that the very act of making the series only serves to reopen an old wound. No one did this for Pamela Anderson; they did it TO her, much like the people who originally released the tape.

In truth, this eight-episode production created by The Wrestler and Big Fan screenwriter Robert Siegel, starts with its loyalties divided. After an intro that recreates Pam’s (Lily James) 1996 Tonight Show appearance in which Jay Leno embarrasses her by asking her about the tape, it is Rand Gauthier (Seth Rogen, also an executive producer of the series), a sometime porn actor and carpenter, who becomes the focus of episode one. He is working on a bedroom remodel of Tommy’s (Sebastian Stan) home, but the mercurial, and frankly, ridiculous rock star keeps changing specifications, and worse, has not paid Rand or anyone else so much as a deposit. Asking for payment only gets Rand fired and Tommy further degrades him when Rand goes back for his tools.

Rand emerges as a central figure at least, in part, because it seems as if no one involved in this series can really decide how they feel about Pam. Stan has a thankless job as Tommy. Imagine the Tasmanian Devil as a human being and that is Pam & Tommy‘s conception of Tommy Lee, a cartoon character. In one scene, he is even given a talking penis for a little heart-to-heart (balls-to-balls?) conversation. (Yes, the scene is ridiculous. A lot of the series is, except when it isn’t. Settling on a tone was apparently not a priority.)

James at least gets to play a flesh-and-blood person, and she captures Anderson’s voice and mannerisms so well that it is shock to realize this is the same actor who once starred on Downton Abbey. But for every scene in which Pam gets to speak to her own agency, as when she describes to a publicist why she admires Jane Fonda or when she angrily explodes at Tommy and her attorney Richard Alden (Paul Ben-Victor) who don’t get what it is like to be in her position as a woman whose life is so exposed and caught in a scandal that will never completely go away, there are others seemingly designed to play into vacuous starlet stereotypes.

In one scene, she is excited at getting a monologue on her series Baywatch, but when she performs it for Tommy, her performance is awful. Producers axe the scene in favor of simply having her run on the beach and we watch as stylists work on getting her bathing suit to hang off her ass just so – it is a mortifying scene in which, again, the series tries to have it both ways – demonstrating how an actor is manhandled by manhandling an actor.

Pam & Tommy is tabloid television given an elegant veneer by its A-list cast and the fig leaf of feminism offered by the women on the production team and women like Lake Bell who direct some of the episodes. But nearly 30 years after all of this first started, this show is really just the latest chapter in the ongoing exploitation of Pamela Anderson, a woman who does not deserve it.