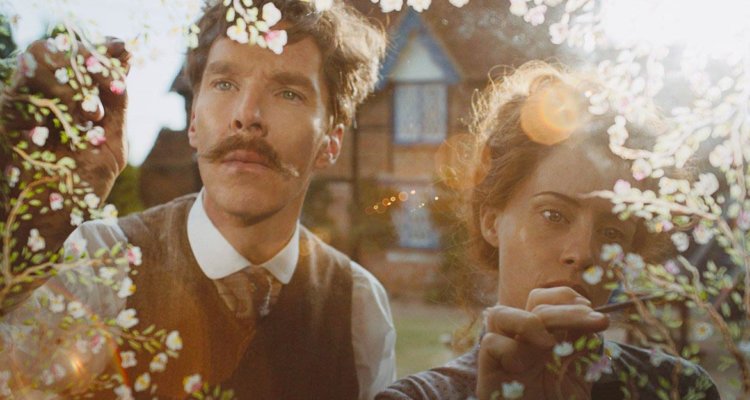 While Academy voters are weighing Oscar votes for his performance in The Power of the Dog, Benedict Cumberbatch made another 2021 film that somehow slid under the radar.

Narrated by Olivia Colman, this story revolves around British artist Louis Wain (1860-1939) who became famous for his brightly colored drawings of anthropomorphized cats with huge eyes and dilated pupils. He was also an eccentric who believed electricity could transform everyday life.

Born with a cleft palate, young Louis had to support his widowed mother and five sisters. When governess Emily Richardson (Claire Foy) moved in, socially awkward Louis fell in love with her, only to lose her several years later to breast cancer.

To amuse Emily, Louis drew sketches of Peter, their beloved cat, in comical poses. In December, 1886, Wain was commissioned by Sir William Ingram, publisher of the Illustrated London News, to create a double-page spread depicting “A Kitten’s Christmas Party.”

Its immediate success made him the cat’s meow, but Wain never bothered to copyright his images which were reproduced on biscuit tins, tea cups and postcards. Between 1900 and 1940, more than a thousand postcards were distributed by75 different publishers, none of whom paid him anything. Deeply in debt, Wain then created cartoon strips for Hearst newspapers.

In 1924, he was certified as insane, confined in the pauper ward of Springfield Mental Hospital in Tooting with a diagnosis of schizophrenia. He spent the rest of his life in psychiatric hospitals – from Bethlem to Napsbury. During that confinement, he fashioned his most original work.

Scripted by Simon Stephenson and director Will Sharpe, this film is beguilingly visual – thanks to cinematographer Erik Alexander Wilson and production designer Suzie Davies.

On the Granger Gauge of 1 to 10, The Electrical Life of Louis Wain is a poignantly surreal 6 – unless you’re a feline fanatic – then it leaps to a 7…streaming on Prime Video.