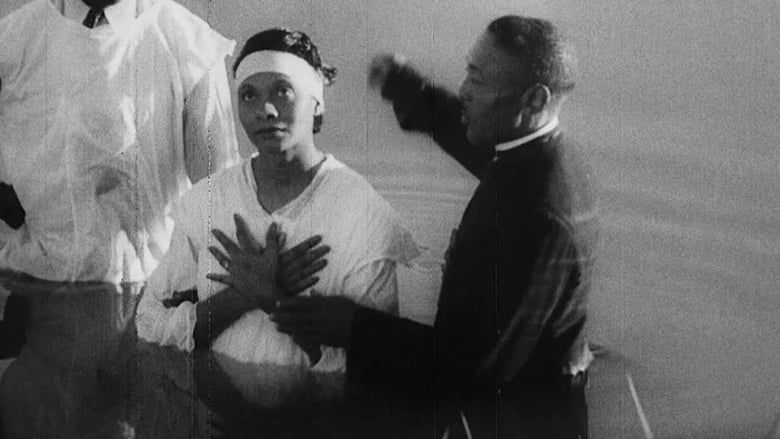 Among the creators of the race films that brought stories by and about African Americans to segregated Black audiences from the 1920s through the 1940s, Spencer Williams holds a prominent place. He acted in 33 films, including the 13 films he directed, and made the most of his low budgets and largely unskilled actors, showing impressive growth in technique, storytelling, and versatility as he worked. The Blood of Jesus was the first feature film he directed and shows what a formidable talent he was.

Working from his own script, Williams plunged deep into the religious mythos and traditions of African American Christianity while bringing a twist to his story of temptation and redemption. He skillfully plays Razz Jackson, the unredeemed husband of Martha Ann (Cathryn Caviness), whom we see being newly reborn in a baptism in the river.

When she returns home, he accidentally shoots and kills her. This tragedy sets up her journey to the crossroads where she must choose the path to Zion or to Hell, with a clownish devil in long johns (James B. Jones) and an angel (Rogenia Goldthwaite) appearing periodically to guide Martha Ann toward their respective domains.

While the story focuses on Martha Ann, whose newly saved soul is still vulnerable to corruption, it is Razz’s conversion that underlies the drama. Aside from Williams’ performance, the acting is pretty weak, and the production values are strictly bargain basement. The action appears to have been filmed without sound, with a badly synched soundtrack added later.

Nonetheless, this film has an authenticity, sincerity, and an almost nonstop gospel track that make it enchanting. I particularly liked the scenes in a juke joint where Williams’ young performers show off their jitterbugging skills.

Martha Ann’s choice literally relies on the blood of Jesus in a scene of real power. It is easy to imagine that the film as a whole must have made a strong impression on its original African American audience. It still holds great fascination for today’s audiences.