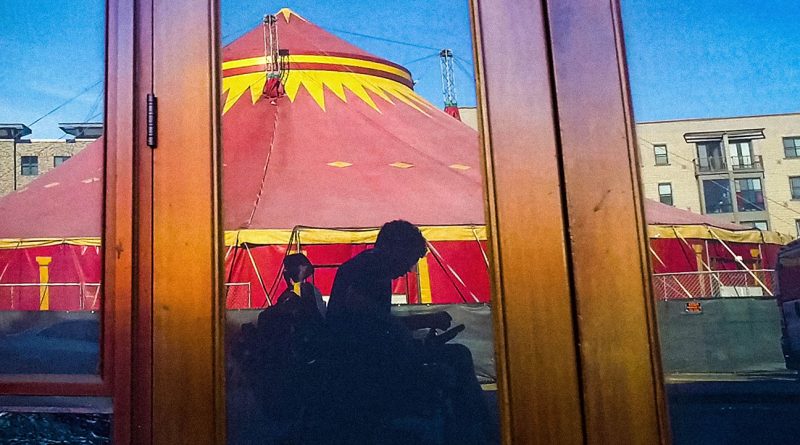 Writer/director Reid Davenport says the red circus tent near his apartment can’t help but make him think of the old Freak Shows, where people would gawk at “human oddities” such as people with disabilities.

Those shows might be gone, but he still feels like he’s in one when people stare at him or don’t see him, he notes in his 2022 Sundance documentary I Didn’t See You There.

Then again, he observes, perhaps he’s joined the show by turning the camera on his experiences.

Shot from a handheld camera as he walks or uses a wheelchair, I Didn’t See You There shows what Davenport sees day to day—and how other people view him. It captures an intimate look at life with a physical disability without romanticism or preaching but with nuance and empathy.

From his lower vantage point in his chair, Davenport catches sight of reflections and lights in different surfaces, or patterns of sound as his wheels clack along the sidewalks of Oakland, California.

He also sits with uncomfortable moments, such as a bus driver who insists he face the other passengers, strapping in his chair so it doesn’t move. The other riders seem to look right through him.

People who block a ramp that enables him to cross the street or enter his apartment apologize while acting like he’s inconveniencing them or making them feel guilty. Well-meaning passersby ask if he needs help, or a neighbor clumsily compliments him for how he lives his life. “More power to you, man. You … fight through.”

Everyone has something, right? Davenport notes.

Davenport loosely ties his musings on the Freak Show to his experiences, which include visits to his hometown of Bethel, Connecticut, whose famous native P. T. Barnum popularized such displays. While he seems to enjoy time with his relatives, the small town is a type of “purgatory” for him because his movement depends on others, he says. To access the world, he needs “robust public transportation and continuous sidewalks.”

My 12-year-old son uses a wheelchair and also walks with leg braces and forearm crutches. I found I Didn’t See You There immensely relatable. Some camera movements may be disorienting. (I felt motion sickness in parts that record a rush and flow of different colors and surfaces beneath the wheelchair.) But overall, people for whom disability is a part of life will appreciate Davenport’s voice—and those unfamiliar with disabilities will find this a thought-provoking journey.