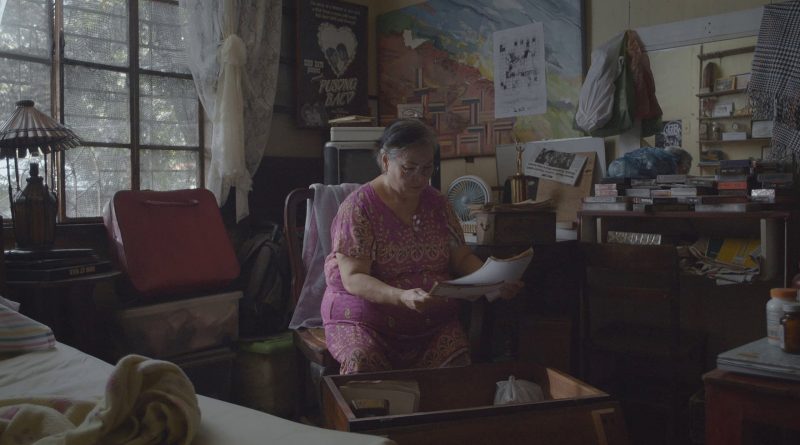 The career of a filmmaker might be dead in Leonor Will Never Die, but this winsomely zany adventure—and its main character—show that the power of stories to connect and heal is very much alive.

Leonor Reyes (Sheila Francisco) forgets to pay her utility bill but spends her money buying DVDs from a street vendor, getting lost in pulpy action films like the ones she used to make. One day, soon after she’s inspired to write again, she literally winds up in the film she’s writing. A neighbor, frustrated over his girlfriend’s absorption in a soap opera, tosses the TV out the window, accidentally striking poor Leonor in the head.

While her younger son, Rudy (Bong Cabrera), and ex-husband, Valentin (Alan Bautista), worry by her hospital bedside, Leonor watches her incomplete film unfold. She soon discovers that her characters can see and interact with her—and she’s not sure how this story ends.

Leonor’s fictional hero, Ronwaldo (Rocky Salumbides), is a scrappy construction worker protectively in love with a dancer named Isabella (Rea Molina). He glares “at the evils of the world he is ready to fight,” Leonor types on an old Smith-Corona. He’s also itching to avenge the shooting death of his younger brother.

In real life, Leonor lost her older son, also named Ronwaldo (Anthony Falcon), in a shooting. With a bloodstain near his shoulder, ghostly Ronwaldo wanders around her house and talks with her at night. She tells him about Rudy, who wants a life of his own with his sweetheart but worries that she can’t take care of herself.

Rudy eavesdrops through the door but doesn’t think his mother imagines Ronwaldo. He and his father also talk with the ghost, who has a dry yet compassionate disposition.

Francisco’s wide-eyed, endearing performance bridges the twisty stories of Leonor’s real and fantasy worlds. Ramirez Escobar and cinematographer Carlos Mauricio provide an additional anchor for the audience by shooting in two visual styles. The fictional film recreates the low-budget, gritty look of 1980s action movies full of fistfights, gunfights, beautiful women, sketchy villains, and gruesome deaths. Leonor’s real life is lighter and brighter, even with her head bandaged and unconscious, her fingers pecking the air as if typing in her sleep.

Rudy becomes desperate to finish his mother’s fictional story, hoping it will help her recover. Meanwhile, the fictional Ronwaldo and Isabella want to reunite Leonor with her family. The characters at first think she’s crazy, talking about how she’s written them and saying some dialogue at the same time. Yet soon, they call her “Grandma,” and Ronwaldo says he can tell she’s a loving person. When Leonor says they’ll escape their troubles, they dare to hope that she’s right. They want a happy ending, too.

Ramirez Escobar balances humorous touches, such as fictional Ronwaldo leaping over gunfire, with heartfelt moments, such as Leonor meeting this character’s mother. “I also lost a son,” Leonor tells her, apologizing for killing the fictional son in the story while peeling back her own grief. Elsewhere, Rudy watches the brain images of Leonor’s MRI blossom into colorful blooms. Where do these stories you like come from? he muses. “I can’t read you, Ma.”

The plot unfolds at a steadily engrossing pace, and the resolution is as off the wall as it is satisfying. In its affectionate take on grief, creativity, and how we all rewrite our lives, Leonor Will Never Die is a story where it’s a pleasure to get lost.