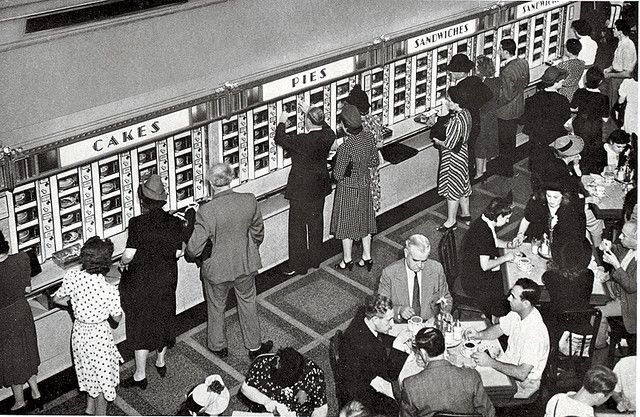 The Automat is irresistible for anyone who relishes images of old New York, dining history, art deco style and an honest cup of coffee. That it pours from a European-inspired spigot just adds to the appeal of Lisa Hurwitz’s The Automat, an entertaining and nostalgic look at the once wildly popular eateries with their glass, chrome and marble interiors founded in 1902 by Joe Horn and Frank Hardart. First in Philadelphia and then in New York City, Horn and Hardart created a novel way for people to grab a quick, affordable but high quality meal with just a handful of nickels and the twist of a chrome knob. But more than that, they brought a sense of community to the stylish way they designed their dining halls and in the dignified way they treated their customers and their employees.

Rich with film clips, archival photographs and anecdotes, the film traces the beginnings of the automat, its popularity with people from all walks of life from school kids and businessmen to artists, show businesses veterans and the homeless, right up until the last one closed in New York City in 1991. How lovely to spend time with the late Carl Reiner and Ruth Bader Ginsburg as they reminisce about eating at the automat while studying and working. The irrepressible Mel Brooks, who at this point should be protected in bubble wrap, not only shares anecdotes about his favorite meals at Horn and Hardart’s while working as a writer on Your Show of Shows but sings his own composition, “There Was Nothing Like the Coffee at the Automat,” over the closing credits. Yes, it’s that kind of film.

The Automat is an invaluable chronicle of a way of life that can never be repeated. Changing demographics and economics by the late 1960s doomed the elegant but affordable eateries. Real estate was more valuable than the cafeterias themselves so the descendants of the original owners were forced to lease the prime locations to Arby’s, Burger King and other fast food suppliers with business models in direct opposition to Horn and Hardart’s insistence on quality, affordability and a memorable dining experience. It’s one of the reasons that Starbucks CEO Howard Schultz’s self-righteous identification with Horn and Hardart is so annoying here. The Automat shares a sense of nostalgia and history with the 2014 documentary The Sturgeon Queens about “appetizing” shop Russ & Daughters which opened in 1914 on New York’s Lower East Side and remains a New York institution to this day.