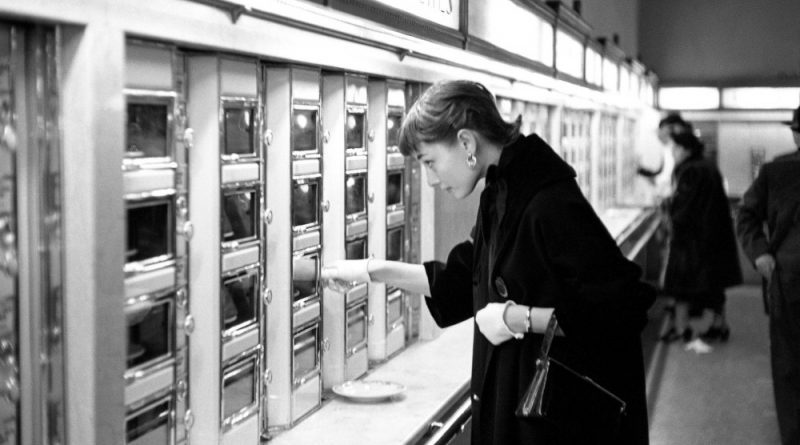 In 1964, when I was 9, I made my first-ever trek to New York City with my parents and my older brother in our station wagon. The occasion for the trip was the World’s Fair, where we rode in a self-driving Ford Mustang while giant dinosaur statues dotted the landscape around us, Also, I got to enjoy my first-ever Belgium waffle and rode a subway for the first time ever.

But I was more inquisitive about the hustle and bustle of New York City itself. My parents told us Buffalo, our hometown, was the second biggest city in the state. But I was overwhelmed by all the sights, sounds and smells of the city that never sleeps. At some point, my dad decided to introduce us to the joys of an automat. All I wanted was a slice of pie. I don’t recall what kind it was, but it hit my tummy’s sweet spot.

So I was happy to breeze through memory lane as I watched Lisa Hurwitz’s doc The Automat, which digs deep into Horn and Hardart cafeteria chain. There is something delicious about learning how these art-deco emporiums welcomed one and all, rich or poor, White or Black, male or female, even if they were homeless and simply used a cup to make a condiment soup with mustard and ketchup. The last automat in Manhattan closed up in 1991, while fast-food chains like Burger King and Arby’s took over their real-estate property and an era came to an end. How did these cafeterias function? You plunk a nickel or two into a slot, and out would come a beef sandwich, a piece of pie, mac and cheese or creamed spinach. You could also serve yourself New Orleans-style coffee that came out of a fancy spout shaped like a dolphin head and concluded with a squirt of milk. And, as a bonus, you didn’t have to leave a tip.

Oddly enough, the first automat known as Horn and Hardart was built in Philadelphia in 1902. Frank Hardart died in 1918 and Joseph Horn passed away in 1941. Their families however, kept the business going including throughout the Depression era. Relatives of the founders share their thoughts with Hurwitz while admiring how they treated every customer equally. In fact, Howard Schultz – the former CEO of Starbucks coffee shops — says he was inspired by the automats of yore when he started his chain.

But the best part of this deep dive into the New York City’s culinary past is how Hurwitz snagged some impressive participants to share their memories of their love of going to automats. Right away, she puts Mel Brooks on the screen as he tries to help her to do her research and offers other tips. There is a photo shown of Brooks as a boy with his three older brothers at an automat. Both he and his late buddy and writing partner Carl Reiner often would share an economical repast together.

Another high-level fan of the automat in its heyday was the late Ruth Bader Ginsberg, who — as a single working woman on a budget — felt safe in an atmosphere in such upscale surroundings. As for matters of race, the late Colin Powell, the former Secretary of State under George W. Bush, recalls how his family was treated as equals without any barriers when they tossed coins into the slots. Actor Elliott Gould, when he started out in plays, also saw automats as godsends.

Besides scoring some high-level talking heads, two lady authors – Lorraine B. Diehl and Marianne Hardart — actually wrote THE book about automats – and offer other insights. Meanwhile, Hurwitz focuses on mentions of automats in pop culture, whether it’s an Edward Hopper painting set in an automat, Irving Berlin’s 1932 song “Let’s Have Another Cup of Coffee,” the 1962 Doris Day comedy That Touch of Mink, and an automat references in such ‘60s TV series as The Flintstones and Candid Camera.

At a brisk hour and 18 minutes, Hurwitz’s covers a lot of ground. But her best move is how she allows Brooks to be her designated narrator. Although he refers to The Automat “as your mashugana documentary,” which isn’t quite a compliment, he does grace her work by penning and singing a catchy original song along with a full orchestra as the credits roll, titled “At the Automat.”