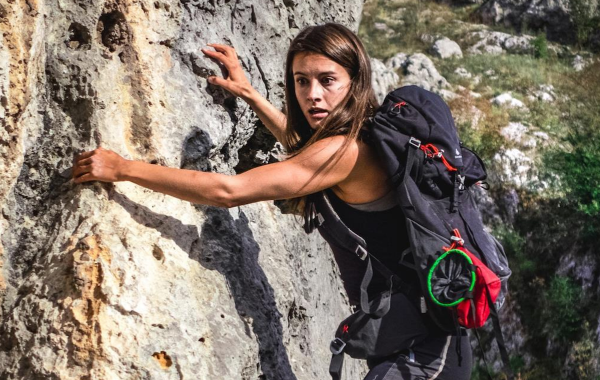 The Ledge is an attempted homicide on its audience’s good-natured willingness to suspend disbelief. Viewers who actually enjoy mountain climbing, or even hiking, are likely to find themselves howling at their screens at this supposed thriller’s depiction of its characters scaling the Dolomites in Italy.

Kelly (Brittany Ashworth) and her good friend Sophie (Anais Parello) have gotten together to spend some time climbing as a memorial tribute to Kelly’s late fiancé who taught her the how-to’s of the sport before his untimely death. She still grieves his loss in a fall from the Dolomites so this is supposed to be a form of closure for her. However, Sophie seems to have another agenda then being supportive of her friend when four loud, hyper-aggressive men show up at the cabin next to theirs.
When Kelly finds herself fleeing for her life she doesn’t jump into her car and head out to find the local authorities. Instead, she defies logic by running toward the mountains with the men in pursuit. It is almost as laughable as when Daffy Duck breaks the wall in the cartoon, “Beanstalk Bunny and says to the audience, “Well, I better get to work climbing that thing or we won’t have any picture.”

The rest of the film is about a game of cat and mouse played out between the men and Kelly. The aerial shots of the mountain range are gorgeous and it would have been great to see more of Kelly’s climbing techniques. We see her use powder on her hands and carefully put on special climbing shoes but a little more context on how these are supposed to help her would have given more depth to her character. Ashworth tries hard to make her character sympathetic but there is not much she can do about the weaknesses in the plot.

The men pursuing her are so broadly written as stereotypically “bad” that they do everything but twirl their collective mustaches and threaten to tie her to railroad tracks. Maybe threatening to throw her off the mountain is just as bad, if not worse. The Ledge could have been an intriguing thriller about climbing and survival but as it is, a quick click of your remote will rescue you from this mile high mess.