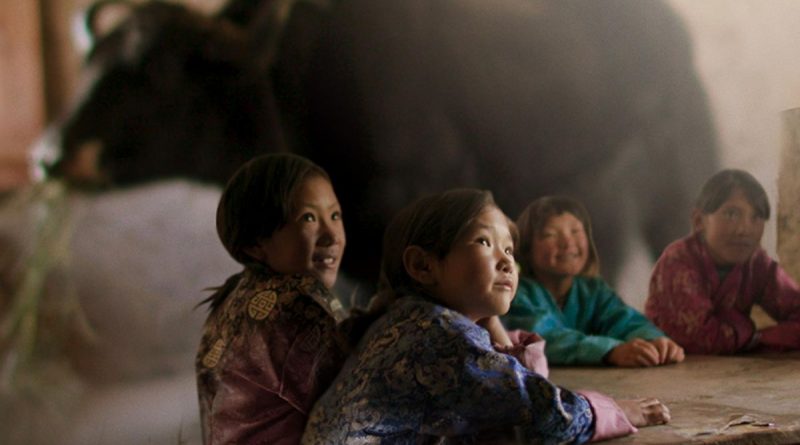 Lunana – A Yak in the Classroom travels to remote Bhutan.

The country Bhutan is unique, measuring Gross National Happiness instead of Gross National Product. This idea surfaces several times in Lunana – A Yak in the Classroom, the first Bhutanese film nominated for an Academy Award for Best International Feature. In fact, that yak does reside in the school, as Ugyen learns when assigned to teach in this incredibly remote village.

From his home in Thimphu, Bhutan’s capital, Ugyen objects to this appointment, citing altitude difficulties. His supervisor, who assigns him Lunana for his last year of compulsory service, responds, “You don’t have an altitude problem, you have an attitude problem.” Therein lie universal connections: bad attitudes and the desire for happiness.

Despite objections, Ugyen begins his eight-day trek to Lunana, home for fifty-six residents located in the Himalayas, on the Bhutan – Tibet border, at 14,000 plus feet. The usually nonexistent electricity is only solar, the classroom lacks supplies and even a blackboard, and the heat comes from burning yak dung. It does have eager students who revere teachers because, as several say, they touch the future.

Significant themes include: the mutual support among the entire community, the love of pristine landscapes (and the impact of global warming), the importance and beauty of song, and the appreciation of yaks, animals that “benefit us so much,” as several observe. Shot on location and with many actual Lunana residents, director Pawo Choyning Dorji offers the experience of the cultural contrasts through our surrogate Ugyen. Along with him, we learn about Bhutanese culture; for example, on the hike to Lunana, his guides stop to burn incense and make offerings at the mountain pass, a place honored as the abode of the protectors. Where prayer flags hang and blow in the wind, they pay their respects for a safe journey and to return some day.

I must add that five years ago I spent two weeks in Bhutan and witnessed this ritual on several occasions, plus many yaks. Lunana brought back the most wonderful memories of the most invariably kind, generous Bhutanese people and the gorgeous country, also featured. Sweet without being sentimental, poignant though never preachy, in Dzongkha with English subtitles, Lunana – A Yak in the Classroom is available through streaming services and Video on Demand.