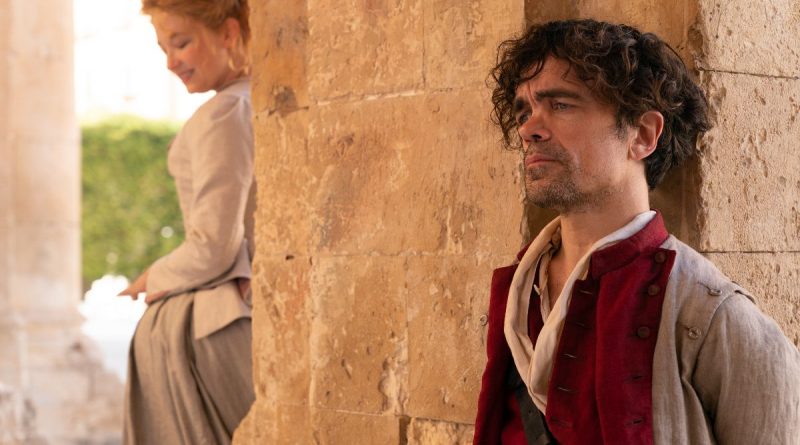 Director Joe Wright‘s Cyrano is a feast for the eyes. The latest story is based loosely on the life of Savinien de Cyrano de Bergerac, a French novelist, playwright, epistolarian, and duelist from the 1600s. In 1897, the French poet Edmond Rostand published a play, Cyrano de Bergerac, also based in broad strokes on Cyrano’s life and notably his unrequited love for Roxane (her name spelled this way from the original story), as he was the hidden interlocutor between the not-as-gifted in prose soldier Christian de Neuvillette (played in this effort by Kelvin Harrison Jr.), smitten with the same Roxanne (as producers have spelled this character’s name for this film).

Rostand’s Cyrano de Bergerac and Wright’s version are both tragedies, with loss at every turn. Cyrano was confident in every area but himself, and Roxanne’s loss of never fully experiencing true love except in expertly crafted letters, and Christian’s loss of knowing his Roxanne was in love with the soul of the author who penned these letters, that is, Cyrano.

Wright’s adaptation of the 2019 stage musical by Erica Schmidt is an emotional ride, a musical and yet deeply dramatic with Peter Dinklage cast as Cyrano.

His “affliction” is his height, not his nose, as was the original story presented. Still, Dinklage delivers the impact of a man who profoundly understands ridicule and shame and a practical realization he believes is out of his league, physically anyway. The irony, of course, is that men often fall in love with their eyes and women with their ears. Roxane/Roxanne likely would have responded positively to Cyrano’s focused literary ardor by loving him back.

In Wright’s film, Roxanne (Haley Bennett) is a luminous being, equally curious and well-read, and a distant cousin. She already adores Cyrano for many reasons, but his true feelings are shielded. Christian happens to cross paths with her, catch her eye, and then the ruse of this three-way courtship begins.

The villain in this story of unrequited love is a profoundly flawed rich man, Count De Guiche (Ben Mendelsohn). He has the power of the pen for the King, ultimately thwarting Christian’s advances with Roxanne by sending him to certain death in war.

So we have music and song, touching moments of deep reflection, action-filled sword fights, and cunning and regret from all the parties: Roxanne, Christian, Cyrano, and the imperious De Guiche, who is determined to have Roxanne no matter what.

This reviewer is not a fan of musicals that are somewhat fully committed to the genre, and this film, as emotionally stirring as it gets, is on the fence a bit about what it is, a straight-up tragic drama, or a musical drama, or a drama dotted with some song.

When acting is on the table, the film soars. Dinklage is gifted and a true star. His presence and his range of talent exceed all, and his heartbroken auteur of love letters that deceive will rip your heart out.

From Cyrano’s first appearance challenging the pompous stage actor Montfleury to his dispatching of the dandy in rouge, Valvert, Dinklage deftly raps his way into the forefront as the main character. But the musical aspect of this effort shines best when the doomed soldiers at the front are singing “Where I Fall,” which reveals the futile practice of combat and the realization you are fodder for a rich man’s war-as. They all are and always will be. Christian’s heroic actions and determination to get Cyrano to fess up and let Roxanne know the truth is a moving moment.

The crafts are extraordinary. Major kudos the Wright’s production designer, Sarah Greenwood, who takes us into the nightlife of the theater, the grunge of the streets, and the battlefield and sumptuous rooms of De Guiche and makes the jump out vividly. As is cinematographer Seamus McGarvey’s sweeping lensed work, Massimo Cantini Parrini’s costume work is also award-worthy.

Go for Peter Dinklage. Stay for the heart-wrenching turns of events and well-crafted elements that propel you into the past with a story equally as old as time.