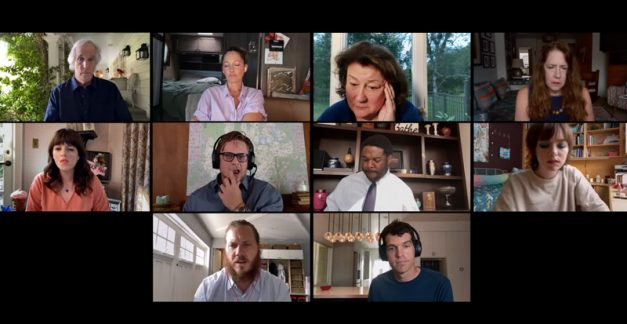 There have been several attempts at making movies while using Zoom technology during the pandemic, such as the horror film Host and the two-hander dramedy Language Lessons. But for writer-director Stephanie Laing, her wry comedy Family Squares, is a highly personal mission since it was inspired by the loss of her mother back in 2019. It’s also a love letter to her family that is stacked with an outstanding ensemble cast that those who use Zoom to communicate with one another they are seen occupying virtual cubicles. The title is a salute to the long-running TV game show Hollywood Squares, where celebs sat in separated by a tic-tac-toe grid. Laing mostly shot remotely during quarantine and directed her stars via video conference.

Front and center is June Squibb, however, who was Oscar-nominated for her sassy supporting role in 2013’s Nebraska. Her character’s burial details are in the hands of her expansive clan as they beloved 90-ish matriarch Mabel Worth is about to go meet her maker. But she also records four short videos that she filmed previously with the help of her lawyer/funeral director (Sam Richardson), as she details her wishes for her burial and also alludes to a long-held family secret that eventually comes out as a shock. Those chunky glimpses of Mabel allow Squibb to basically steal the show with her wicked sense of humor, despite being deceased.

Among the other cast mates who are eligible for AARP is Ann Dowd, who plays Mabel’s late- life companion during her waning year. Margo Martindale is her daughter who raised five children, including three grown sons. widower Bret (Billy Magnusson), who also is raising his teen daughter, Casey (Elsie Fisher), Chad (Timothy Simon), who claims he is in Russia, and Kevin, who is a self-published book writer, who is quarantined in a garage after catching COVID-19. She also has two grown daughters, Dorsey (Judy Greer) and Katy (Casey Wilson). Completing the Brady Bunch squares is Uncle Bobby, who is played by an underused Henry Winkler.

At this point, each member is staying in different parts of the country while many old grievances are shared. Laing also provides a narrator in the form of Rob Reiner. As he says, “George Burns once wrote that happiness is having a large, loving, caring close-knit family … in another city.” That is somewhat true, but in the end everyone makes peace with the fact by Mabel led the way while granting her wishes. Dramatically, Family Squares quaintly moseys along as the cast does their best to reflect our lives these days.