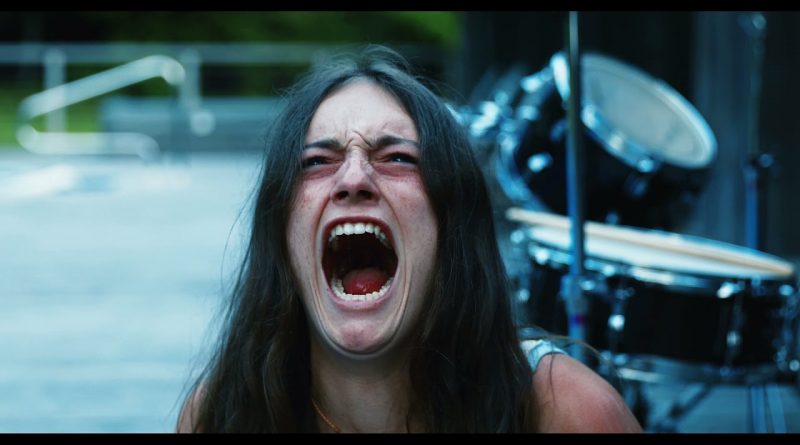 Hellbender is a crafty, coming-of-age, low-budget horror film from family Toby Poser, John Adams, and Zelda Adams that premiered at the Fantasia International Film Festival 2021. The mother-father-daughter team has been making movies since 2013, breaking out in the horror genre with 2019’s The Deeper You Dig. Zelda, John, and Toby share co-writer/co-director credits for Hellbender, a story about a teen girl gone wild as hell.

Hellbender follows Izzy (Zelda) and her almost 200-year-old mother, who is deeply connected to witchcraft. Izzy’s life is simple — she is homeschooled, doesn’t go past her family’s property line for fear of aggravating her rare immune disorder, and is overjoyed when her mother returns home from town with oddities from the antique store. Together, they live off their land, eating twigs and berries and making music for their band Hellbender.

Izzy’s curiosity about life outside of her little world peaks when she meets a lost hiker (John). Concerned about protecting her daughter and, moreover, her family’s heritage of dark secrets and seductive power, Mother “dusts” the life out of him. Still, Izzy’s curiosity about her power reaches an all-time high when she meets Amber (Lulu Adams), a neighborhood teen girl who breaks into her neighbor’s backyard to use the pool and occasionally throws house parties. After eating a worm, Izzy’s witchy powers ignite and, as Mother feared, all she wants is more.

Hellbender reaches its climax in another trippy sequence where Izzy realizes her full potential, terrifying her all-powerful Mother. On the surface, this film is about realizing your potential and the danger of power. But deep down, it’s about the fragile bond between a mother and daughter — one I found myself rooting for as Izzy displays her inner Hellbender and reiterates the words that once kept her from experiencing life: “I’m going into town; you need anything?”

What Hellbender does isn’t unique — coming-of-age horror movies in the witchy subgenre have a rich history (think The Craft, Carrie, and even Jennifer’s Body). But the family filmmaking creativity behind this movie makes it noteworthy. What’s lacking in dialogue is made up for in trippy, gory scenes between mother and daughter that explore their rich history in witchcraft, making it worth the watch for avid horror fans.