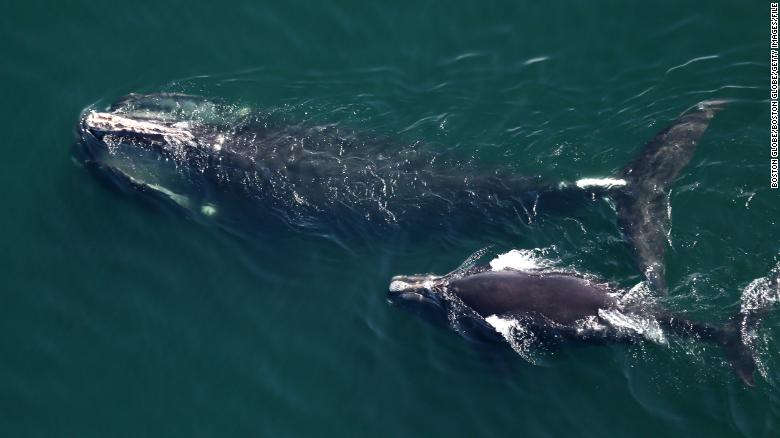 Convincing an audience to care about a whale most have never heard of, let alone can picture, is a challenge filmmaker Nadine Pequeneza takes on in the conservation documentary Last Of The Right Whales. Winner of Best Canadian Feature at the 2021 Planet In Focus International Environmental Film festival, the documentary presents audiences with not just an unparalleled look at the North Atlantic Right Whale, but an engaging story.

Focusing the film on wildlife photographer Nick Hawkins, ecologist Dr. Charles “Stormy” Mayo, and a team of whale conservationist led by Barb Zoodsma, Last Of The Right Whales explores the effects humans are having on the whale population in the North Atlantic. With so few left, nearly all the North Atlantic Right Whales are known by scientists and researchers by name, creating a special bond between them.

There is NARW #3560, better known as Snow Cone, who gleefully plays with her calf. But it’s not all happy moments. There is NARW #4615 who distressingly thrashes at sea after being tangled in fishing rope while whale rescuers watch with dismay, waiting for the whale to calm down so they can approach.

But unlike their southern counterparts whose numbers are healthy, the North Atlantic Right Whale is in trouble. With 85 per cent of the species having been entangled in rope at least once in their lives, the film features some distressing images but are interspersed with ones of pure joy at seeing these rare whales in their natural habitat.

It’s these encounters that Pequeneza has unprecedented access to through special permits obtained for filming, obtained from both the Canadian and U.S. governments for both the Gulf of St. Lawrence and the whales’ migration path off the Florida Keys. With regulations keeping humans away from the whales for their protection, it is no wonder most people haven’t heard of the North Atlantic Right Whale – a whale whose physiognomy looks nothing like the splashing orca or humpback so many can easily picture. Due to those important protective measures, the most people have seen of the whales is a fin or the top of their heads breaching the sea. With Last Of The Right Whales, this intriguing species is finally ready for its close-up as Pequeneza and photographer Hawkins able to provide never-before-seen and underwater images of the whales for the first time. For that glimpse alone, this documentary is worth the watch.

In addition to the incredible ocean footage, the experts of the film are also what make the story compelling. While those whose livelihoods revolve on fishing are often painted as the “bad guys” in ocean conservation, Pequeneza rewrites the narrative with third-generation crab fisherman Martin Noël. Dispelling the notion that fishermen are anti-conservation, the film highlights the efforts Noël and his fellow fishermen are making as part of a whale rescue team disentangling North Atlantic Right Whales caught in lobster and crab gear in the Gulf of St. Lawrence.

Thanks to Pequeneza’s storytelling and choosing to focus on the specific causes of the whales’ decline, Last Of The Right Whales presents a known problem instead of a grand scale “climate change” message that can feel like too big of a problem to tackle for viewers. The film has enlisted the support of groups including the International Fund for Animal Welfare (IFAW), Sierra Club Canada Foundation, The Pew Charitable Trusts, Canadian Wildlife Federation, Canadian Whale Institute and Oceans North as part of its campaign, leaving viewers with a promising action plan (https://lastoftherightwhales.com/take-action/).

The Last Of The Right Whales opens in select theatres beginning on World Whale Day on February 20.