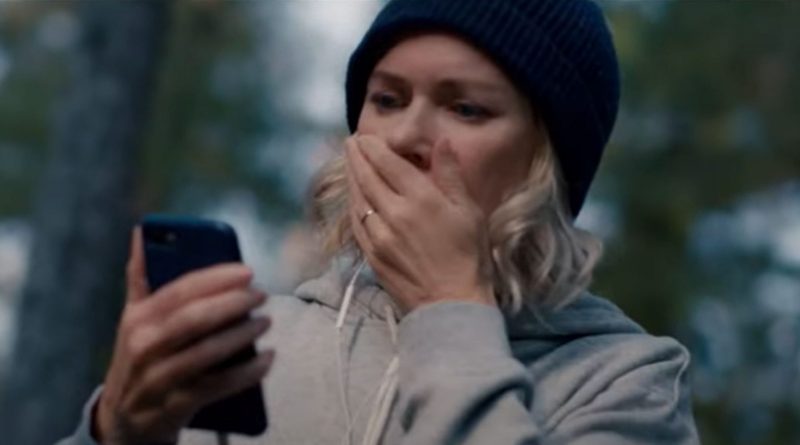 The unthinkable yet possible is happening. Recently widowed mom Amy (Naomi Watts), still coping with the aftereffects of her husband’s death particularly as it impacts her teenage son Noah (Colton Gobbo), receives the news that there is an active shooter at the high school. Her actions and reactions spiral out of control taking what starts as a chilling moment in time, and turning it into a preposterous one.

Writer Chris Sparling sets the stage in a peaceful, idyllic small town as director Phillip Noyce captures the serenity visually. We meet Amy early one weekday morning, frustrated yet compassionate about her son not going to school, who plays hooky herself and goes for a mind-clearing run. Continuously connected by technology, Amy is plagued by call after call — I’m thoroughly impressed by her ability to run and talk simultaneously — until she finally pushes that much-needed “do not disturb” button to green, allowing herself to get her heart rate going as she is enveloped by the comforting foliage of Mother Nature’s arms.

The tension we feel as Amy navigates the winding roads on foot, juggling work issues, parental demands, and overall concerns of her own grief as the anniversary of her husband’s death approaches, is palpable. Choosing the “do not disturb” button gives Amy (and us) only a brief moment of relief only to have the emergency alert tone abruptly blare, jarring us out of the momentary comfort. And Amy’s world, miles from home, begins to unravel.

This is primarily a one-woman film as Amy attempts to determine if her son is at school and what role he plays in the situation. Small pieces of information are doled out leading us and Amy down sometimes erroneous paths, both literally and figuratively. Calling friends, colleagues, acquaintances, and emergency personnel, we are privy to her conversations, and we “see” Amy’s worst nightmare come to life. Still on foot, Amy tries to get to town, but all of her efforts are thwarted by her own inabilities and the film’s pivotal and catastrophic turns Sparling has chosen for us to follow.

While The Desperate Hour finds a tone that captures the riveting situation in the beginning, once Amy receives that phone alert, the intensity and resulting believability is chipped away, bit by bit, until there’s no credibility left in her decision making process and the film’s core.

Watts gives us a worthy performance, carrying the movie with the utmost skill. As a mother, she is distraught over the information she is receiving, but she must find a way back to her kids. We believe she is distraught. We are feeling what she is feeling. And more importantly, initially, we are thinking what she is thinking as we are taken down the darkest corridors of her mind. Watts nails this emotional aspect of the story as she tempers it to focus on her goal…saving her son. The script, however, pushes Watts’ character to make decisions, even with this emotional situation, that force us to suspend belief for the sake of the film. For example, not for a minute do we believe that Amy, an avid runner, would be in unfamiliar territory or that she would run in one direction so far from home that she doesn’t know her way back. And this is the crux of the entire film. Getting lost. Running through forested trails, losing her GPS (of course), getting a concussion from which she can immediately recover, and ***spoiler alert*** solving the crime to save the day. This pushes the cognitive and sensical limits that we agree to when we sit down to watch a fictional tale.

Creating and executing a film that takes place in what feels like real time with one person is a difficult endeavor. Locke starring Tom Hardy and the Swedish version of The Guilty starring Gustav Moller are prime examples of using this style successfully. Unfortunately, Watts’ performance and the skilled cinematography can’t save the script which ultimately lets us down.

School shootings have become a part of our daily lives. Children and teachers train for the event. It’s a sad state of affairs and films which approach the topic such as Mass, do the world a service as they bring us into an understanding about gun reform from a unique point of view. A film like this, does us no service. It takes a serious topic and makes it ridiculous.