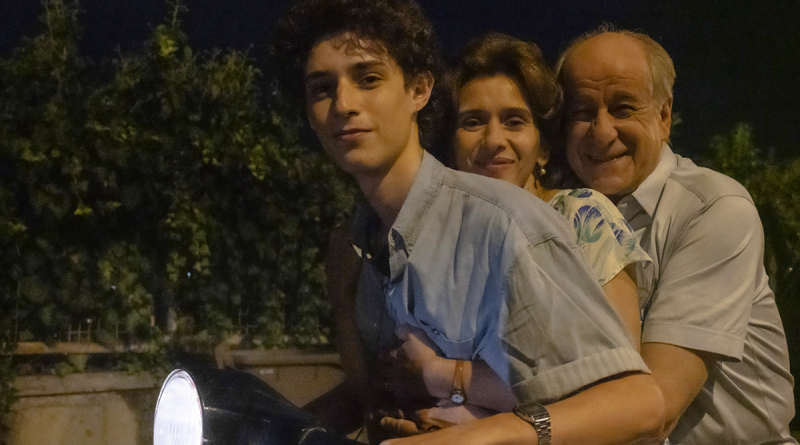 Oscar-nominated as Best International Film, Italy’s The Hand of God is Paul Sorrentino’s intensely personal coming-of-age story, set in Naples in the 1980s.

That’s when Argentina’s Diego Maradona was worshipped as the best soccer player in the world; the title comes from a controversial goal scored by Maradona in the 1986 FIFA World Cup quarterfinal against England.

Although Fabietto Schisa (Filippo Scotti) is one of Maradona’s most avid fans, he also adores his sensual Aunt Patrizia (Luisa Ranieri), who dazzles menfolk when she sunbathes nude, much to the chagrin of her enraged husband, Franco (Massimiliano Gallo).

Fabietto’s best-friend is his older brother, Marchino (Marlo Joubert), an aspiring actor who once auditioned for Federico Felllini, who said: “Cinema is a distraction; reality is second-rate.”

The brothers still share a room in the home their parents: Saverio (Toni Servillo), an outspoken Communist, and prank-playing Maria (Teresa Saponangelo). Fabietto’s extended family includes a cantankerous uncle and a foul-mouthed elderly aunt who wears a fur coat, even in the summer, as she chomps on a dripping burrata.

Of even greater significance, there’s his encounter in the Galleria Umberto with Neapolitan screenwriter/director Antonio Capuano (Ciro Capano), who becomes his mentor, encouraging his creativity. Sorrentino later co-wrote Capuano’s The Dust of Naples (1998).

Paul Sorrentino, who won an Academy Award for The Great Beauty (2012), told the Venice Film Festival audience: “This is a film about sensibility – and hovering above everything, so close and yet so far, is Maradona, who seemed to sustain the lives of everyone in Naples, or at least mine.”

In Italian with English subtitles, on the Granger Gauge of 1 to 10, The Hand of God is a poignant 7, streaming on Netflix.