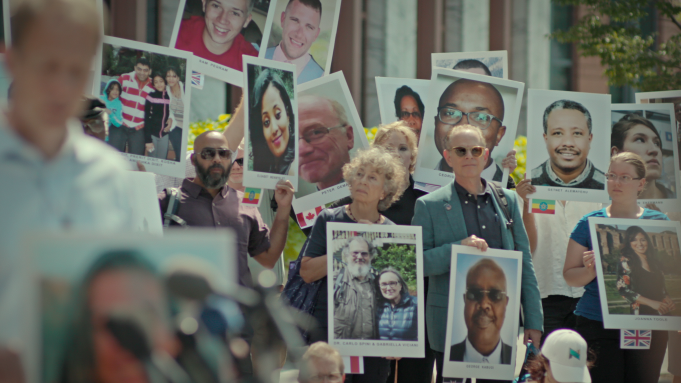 Despite attempts to “other” the crashes — blaming foreign pilots in far-away places — the truth eventually came out: the aircraft was badly flawed.

It’s all revealed in Downfall: The Case Against Boeing, a disturbing documentary directed by Rory Kennedy in a just-the-facts-ma’am fashion.

The deaths of 346 people are what Boeing has to show for its change from an engineering company to a profit-driven corporation. The company that had been known as the safest aircraft manufacturer on the planet swapped it all for bottom line considerations.

The Boeing 737 Max was grounded world-wide for almost two years after the crashes, the longest such delay on record.

Don’t assume Boeing did the right thing by grounding the aircraft. As Wall Street Journal reporter Andy Pasztor explains in Downfall, Boeing would not publicly acknowledge anything was wrong; it fell to Donald Trump to ground the 737 Max — only aircraft to be grounded by a president of the United States.

Downfall offers a brief history of Boeing to illustrate how the mighty have fallen, showing the company’s reign as the pride of Seattle; as past employees attest, the company revolutionized air travel and Boeing management, “Knew that safety came first.”

The unravelling appears to have begun after a merger with MacDonald Douglas in the late 1990s. An eye to profit meant layoffs, staff reductions and faster and cheaper production. Then the company headquarters moved to Chicago, removing the corporate centre from the actual nuts and bolts of building airplanes.

According to the film, the issue with the 737 Max was MCAS (Maneuvering Characteristics Augmentation System), a flight stabilizing program that was a problem from its inception.

Boeing at first concealed the existence of MCAS to anyone outside the company; later Boeing later insisted no new pilot training was required for MCAS.

As someone from the FAA understates, “Boeing had a culture of concealment regarding the MCAS system.”

Downfall makes its point emotionally with the help of the loved ones of those who died on the Boeing flights, family members who address the accidents and what happened afterward. Or what didn’t happen.

Initially, the families heard nothing from Boeing.

Under the leadership of Congressman Peter DeFazio (US House Transportation chair) some of that changed for the better. DeFazio has a big part in Downfall for his role in investigating what happened and making sure Boeing was held responsible.

Garima Sethi, widow of Captain Bhavye Suneja, the Lion Air pilot whose plane crashed in Jakarta, offers quiet testimony in the film about the day her husband didn’t come home from work.

Sethi begged senior officials to ground the 737 Max 8 after her husband’s crash, but to no avail.

Boeing assured everyone a software fix was in the works, and that was supposed to be the end of it.

Then the second crash happened.

It’s cold comfort to watch former Boeing CEO Dennis Muilenburg get raked over the coals here, particularly as the movie mentions his $62 million payout when he finally stepped down.

In the end, Boeing avoided criminal prosecution by paying a fine.

Downfall uses interviews, archival photos and footage and recreations to calmly make its point. The material is grim enough and needs zero embellishment. This is bare-bones storytelling at its most effective.

Boeing could not have had better cover for this debacle than the pandemic; the lengthy grounding of the aircraft and all the rest of it was mostly buried by the COVID-19 daily news feed.

A year ago, the Boeing 737 Max planes were declared safe and returned to use.