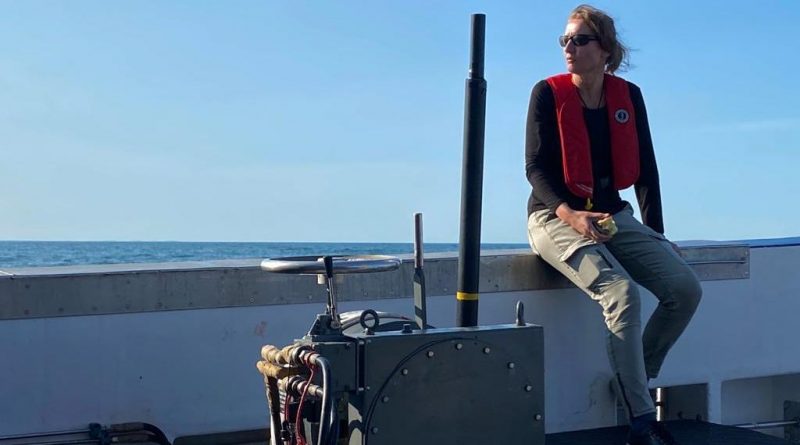 Rachel West spoke to Pequeneza to learn more about these incredible creatures and how Last Of The Right Whales is focused on positive change.

Rachel West: What got you interested in the plight of the right whale? Nadine Pequeneza: It was the deaths in 2017 and to lose 17 whales from species that is so critically endangered. There were around 400 whales when I started filming and then two years later, there is 336 by the latest estimation that came out from the consortium that studies the North Atlantic Right Whale. So it’s really urgent. To learn that we are responsible for their potential extinction and that these deaths are preventable made me really want to tell the story.

RW: Was that the moment that that really made you connect with a story beyond all of these facts? Because the facts alone are quite shocking.

NP: It was just headline after headline that that was coming into the press and, initially, they weren’t able to say what the cause of death was because the necropsy still had to be performed. It was almost a bit of a mystery for people who were unaware of the history of this. … Most people have never seen these whales or heard of them. They don’t understand their history and so when those headlines came out in 2017 it was shocking.

RW: How do you get audiences to connect with the whale that not only people haven’t heard of but also doesn’t look like the orca or the humpback whale that people can easily picture?

NP: They are unusual looking and most people have never seen them. Getting those images was so critical to allowing people to understand them and then to fall in love and so we really had to find people to work with who had the kind of access that we needed to film.

That’s how we came into contact with all of the characters in the film because they work very closely with these whales. What’s great about North Atlantic Right Whales is they spend a fair bit of time at the surface which makes for great filming opportunities. When they’re skim feeding in Cape Cod Bay you really get a sense of the enormity of this whale and the filter feeding when they open their mouths to take in all of that plankton… I mean, how often do you get to look into the mouth of a whale, and actually see their tongue? It’s just incredible.

RW: You have this unparalleled access to not just the whales, but the people on this journey. How did how did that come about?

NP: You know, this film is not for the faint of heart. I think there’s a reason there haven’t been too many wildlife films that focus on North Atlantic Right Whales because of all of the challenges involved with filming them. My entry into the film was actually through Nick Hawkins because he’s a he was a still photographer at the time that I met him and he wanted to document these whales with underwater footage. That was his quest, and that’s how I started filming with Nick.

It was through some of the initial underwater photography that he got that piqued the interest of people in the United States. It’s a lot of meetings and phone calls and paperwork to really get out there. And then it’s perseverance.

RW: You have such amazing footage.

NP: Sometimes you just get incredibly lucky. Everything we filmed in Cape Cod Bay, we actually caught on one day. We were there for 10, but we had one day where everything aligned for us and then working with great cinematographers. I was really fortunate to be working with these people and some of them, they’re not from the film industry, they’re actually scientists using these drones.

RW: I really enjoyed the inclusion of [fisherman] Martin [Noël]’s narrative because so often we see fishermen as the bad guys. They’re leaving nets in the ocean. They’re the cause of this. But here is this small group and you’re showing a different side of it.

NP: Yeah, it’s exactly as you said. So often fishermen are the villains in this story and I don’t believe that’s true. I don’t think people who make their living on the sea have no appreciation for the health of the ocean. The survival of species like the North Atlantic Right Whale that have been around for millions of years is important to the ecosystem. I wanted to show that perspective and Martin is the perfect person. Not only is he testing the ropeless gear, which is what we filmed him doing, but he’s also taking the scientists out every year to do their research on the Gulf of St. Lawrence. He formed the first disentanglement team up in the Gulf of St. Lawrence, along with other fishermen. I mean, for me, Martin exemplifies a fisherman who is trying to find a solution and there are many fishermen like him.

RW: Is there a particular memory of filming and seeing these whales that you will keep with you?

NP: To be near these animals. They’re enormous and just to be in proximity of them is so incredible – it’s magical. There’s a whole scene that we cut of them socializing to music, which is so beautiful. That was the morning we woke up and there was an active group right next to our boat, essentially in a dead calm, the sun was just coming up – the perfect conditions – to see them in that way was incredible.

And then that same day is when we saw NARW #4615, the young male that was entangled in fishing gear. It’s actually the first time that scientists have ever witnessed that and certainly the first time it’s ever been caught on tape because, normally, when we see an entangled whale or when disentanglement teams come across an entangled whale, it’s usually weeks after the initial entanglement has taken place so most of the gear is gone. It’s usually a rope that’s left wrapped around their tail or fin or could be through their mouth. But to see that fresh entanglement and the violence that it causes, that will never leave me.

RW: You mentioned the scene cut to music. The score is beautiful. Can you speak a little about the choice of music and composer?

NP: Her name is Deanna H. Choi. And believe it or not, that’s her first feature film that she’s ever scored. We chose different instruments to represent the whales at different ages and points of development for them so that the mothers where the cello and then the younger calves were the violin and the playfulness of the music. We also use real recordings of their calls.

RW: Then you have Sholeh Fabbri and Joanne Jackson as Impact Producers. It’s not really a role that a lot of people are familiar with. Why was this an important position to have on Last Of The Right Whales?

NP: We want [an Impact Producer] to help engage communities to start having discussions about what they’re seeing in the films because you don’t want to leave an audience too demoralized. You don’t want to leave them in a space where they feel defeated and so the idea of an impact campaign is about taking those messages [from the film] and helping people to become involved in implementing the protections that are necessary to save this whale from extinction. It’s about bringing audiences to subject matter that they might be unfamiliar with and making them care about it and then giving them the opportunity to become involved.

RW: This is such an urgent story. Do you feel optimistic about the future of the North Atlantic Right Whale?

NP: I am, yes. I’m very optimistic because I met such incredible people while I was making this film. People like Stormy and Moira and Barb who’ve been in this for decades then young people like Nick [and Lily]. … So when I meet people like that and I see the young people coming up in this community, I feel very hopeful. And we’ve done it in the past.

We’ve moved shipping lanes, put in place temporary fishing closures when the whales are present and now we’re testing new gear. It’s doable. It’s very possible and I think people just need to know about it. We’re so removed from nature. It’s not part of our lives anymore, we’re really missing that richness, and so I believe that by giving people an opportunity to experience that will want them will make them want to protect it.

Last Of The Right Whales opens this week in support of World Whale Day on February 20 with more screenings planned across the U.S. and Canada this spring.