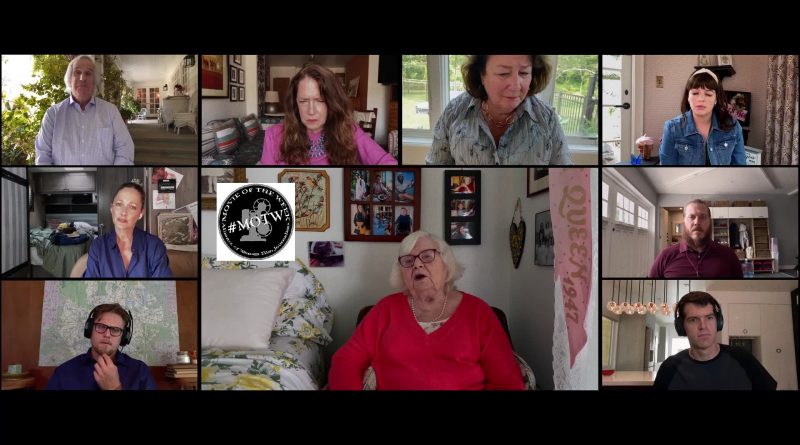 In a pandemic-weary world where pretty much everyone is suffering from Zoom fatigue, it’s notable that Stephanie Laing’s Family Squares makes the experience of watching people interact via little boxes on one another’s computer screens both entertaining and genuinely engaging. It helps, of course, that they’re played by the likes of Ann Dowd, June Squibb, Henry Winkler, Margo Martindale, and Judy Greer — if only all virtual gatherings could be so star-studded! Laing’s dramedy follows the prone-to-bickering members of the Worth family as they come together in cyberspace during COVID lockdown/quarantine to say goodbye to Grandma Mabel (Squibb). Little do they know that the feisty matriarch has a few last surprises in store for her wife (Dowd), daughter (Martindale), son (Winkler), grandchildren (Greer, Casey Wilson, Timothy Simons, Billy Magnussen, Scott MacArthur), and great-grandkids (Elsie Fisher, Maclaren Laing). Secrets are aired, truths are exposed, and relationships are tested.

Clearly, there’s drama aplenty here, but Laing and her ensemble tackle it all with a light touch and thoughtful humor. And the talented cast members keep their characters’ interactions dynamic, despite the fact that virtually all of those interactions happen online. Certainly, watching the Worths’ chaotic, confrontational Zoom meetings is relatable — who among us hasn’t been talked over by a relative or two (or five) in a Zoom call at some point in the last two years? It lends the whole thing a stamp of pandemic authenticity, which is appropriate, since it was filmed in 2020 during lockdown.

The ability to successfully pull together a movie in such trying circumstances is evidence of the creativity and perseverance of all those involved. COVID-19’s impact on moviemaking and releasing has been profound; it’s hard to know yet whether things will ultimately go back to the way they were before, but it seems more likely that, as in other things, we’ll see long-lasting change. If that leads to charmingly scrappy films like Family Squares, then at least there’s a silver lining.– Betsy Bozdech

Loren King What a pleasant surprise this movie is. From its description, I expected something heavy and fraught on the order of the Susan Sarandon/Kate Winslet drama Blackbird. But Stephanie Laing’s Family Squares takes a similar premise, mixes it with pandemic-fueled separation and disconnection, adds a superb cast and the result is a fresh and funny take on family dysfunction and desire for connection. It doesn’t matter that it’s unclear just how elderly matriarch Mabel Worth (June Squibb) plans her death which happens with relative ease. It’s how she gets her children (Margo Martindale and Henry Winkler), five grand-children and two great-grands to get on Zoom where they’re joined by Mabel’s distraught but grounded wife (Ann Dowd, terrific as usual). The “squares” joke, cry, bicker and, prodded by the sly Mabel’s witty pre-recorded videos, uncover long buried secrets. The cast is uniformly great but it’s Martindale, Dowd, the wonderful Judy Greer, and Elsie Fisher (Eighth Grade) as the grieving great-granddaughter who is Mabel’s closest ally who shine and make this pandemic-made movie a gem.

Leslie Combemale It is Stephanie Laing’s sophomore film as director, but much of the power of Family Squares is in the story. She co-wrote the screenplay, which was conceived as a COVID film, channeling experience from loss in her own life. It was originally called Spring Hope, after the small town near her family farm, and was based on a farm visit with her kids to say goodbye to her dying grandmother. Cut to a few years later when she was sitting down to Thanksgiving dinner in New York. She got a call from LA that her mother was dying, and had to said goodbye over FaceTime. These elements came together during the pandemic. Laing was considering the fact that over 200,000 Americans had died without being able to spend the last moments with each other in person, and found a way to tell all these emotional stories while keeping it real and funny and relatable. Read full review.

Susan Wloszczyna: For writer-director Stephanie Laing, her wry comedy Family Squares, is highly personal since it was inspired by the loss of her mother back in 2019. It’s also a love letter to her family that is stacked with an outstanding ensemble cast who use Zoom to communicate with one another while occupying virtual cubicles. Read full review.

Jennifer Merin Family Squares is writer/director Stephanie Laing’s dramatically comedic exploration of a dysfunctional family trying to make things right when their terminally ill matriarch (June Squibb) summons them to a reunion at which she will preside and let some family secrets out of the closet — at what will be her last visit with them. Or, will it? The title Family Squares is an obvious nod to the popular star-studded TV quiz show, Hollywood Squares, but also alerts you that Laing is using Zoom as her vehicle for gathering the far flung family together for that final reunion, a virtual one. Zoom has become a familiar, if not overused, technology in presenting pandemic stories — but Laing’s script isn’t pandemic-related. Her direction and her extraordinary cast (an ensemble including Judy Greer, Margo Martindale, Ann Dowd, Billy Magnussen, Sam Richardson, Henry Winkler and others whose famous faces could have joined the glitterati on Hollywood Squares) dig deep into the story and present compelling characters. And, Joe Klotz’s well-paced editing twists the matriarchal reveals in such a way that keeps you thoroughly engaged. And, June Squibb…well, as mama, she’s triumphant.

Sandie Angulo Chen: Director Stephanie Laing’s dramedy Family Squares is a pandemic-themed movie about an extended family that gathers over Zoom to say goodbye to their terminally ill matriarch (June Squibb) and must continue to keep in touch to fulfill her wishes. The multi-generational cast is fabulous, a mix of talented comedic and award-winning actors (Squibb, her on-screen children Henry Winkler and Margo Martindale; her partner Ann Dowd; and the grand/great grandkids including Judy Greer, Billy Magnussen, Casey Wilson, and Elsie Fisher). Martindale and Dowd should be in more films together! Like Language Lessons this isn’t a movie propelled by plot but by character development and the theme of connecting digitally during quarantine.

Cate Marquis The scattered, dysfunctional Worth family gathers via Zoom to say goodbye to the family matriarch, Grandma Mable (June Squibb), in writer/director Stephanie Laing’s pandemic-set family drama/comedy Family Squares. Featuring a star-filled cast including Margo Martindale, Ann Dowd, Judy Greer, Billy Magnussen, Sam Richardson and Henry Winkler, Laing drew on her own pandemic experiences and used the now-familiar Zoom format for her quirky comedy drama, formerly titled Shoot the Rooster (roosters are a recurring motif). This fractious family, with its share of oddballs, is frustrated by not being able to gather in person to say goodbye and arrange the funeral. But on top of that, Grandma Mable, known as a woman with a twisted sense of humor, is not quite done with them, leaving a video will that drops a few bombs and raises jolting questions, to make things even crazier.