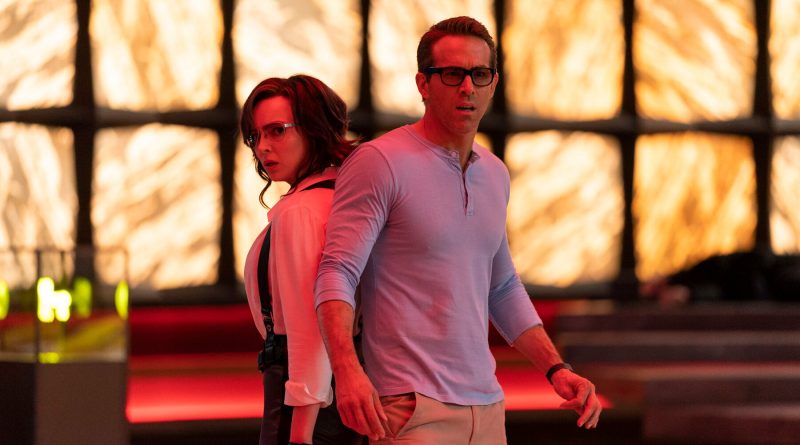 Reynolds plays Guy, a mild-mannered bank teller who discovers he’s actually a background player in a popular, mayhem-filled video game called ‘Free City.’ When he falls in love with Molotov Girl, a spunky, sunglass-wearing, leather-clad biker-chick, he faces an existential crisis and decides to reinvent himself as a hero.

As Guy experiments with the concept of ‘free will,’ his friendship deepens with fellow N.P.C. (non-playable character) bank guard Buddy (Lil Rel Howery), although Buddy is reluctant to break from the restrictive pixel parameters of the game.

The franchise ‘Free City’ is owned by Soonami Studios, headed by avaricious Antwan (Taika Waititi). But the game is based on a code developed by Keys (Joe Keery) and Millie (Jodie Comer), as villainous Antwan blatantly stole their intellectual property.

Familiarity with video games would obviously enhance your enjoyment. Free City is based on Liberty City from Grand Theft Auto III (2001) and Grand Theft Auto IV (2008) games, although the opening aerial shot is of Pittsburgh, PA, and much of the filming took place in and around Boston, MA.

But – as a non-gamer – it was fun to envision “an algorithm who thinks he’s alive” or “the first real artificial intelligence,” assuming the avatar Blue Shirt Guy. And the glowing walls of Stash City may have been inspired by Yale University’s Beinecke Rare Book Library, designed by Gordon Bunshaft.

As for laugh-out-loud dialogue, there’s Millie/Molotov Girl’s observation: “I sometimes forget that not everyone you meet here is a sociopathic man-child.”

Based on a screenplay by Matt Lieberman and Zak Penn, it’s directed by Shawn Levy (Night at the Museum series), who stuffs the fable with techno-chatter, special effects, ‘inside’ jokes known as Easter Eggs and celebrity cameos, including YouTube gamers.

Want more Ryan Reynolds? His The Adam Project streams on Netflix on March 11.

On the Granger Gauge of 1 to 10, Free Guy is an addictive 7, perhaps the most enjoyable video-game-inspired movie yet….on Disney+.