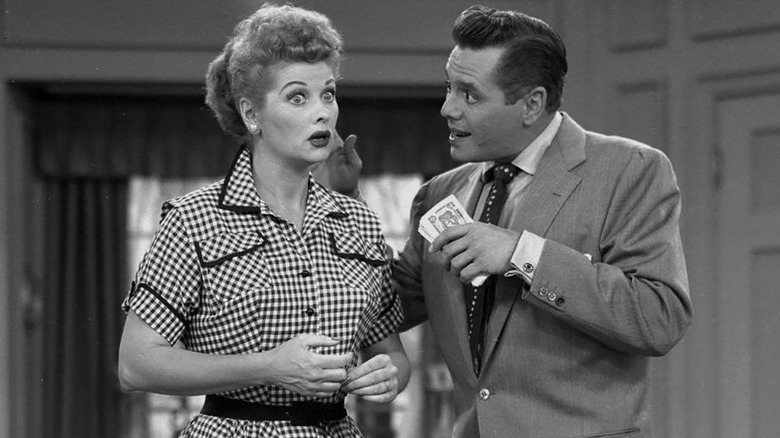 As a card-carrying Baby Boomer, I watched the ground-breaking sitcom I Love Lucy as well as the reruns that continue to be recycled throughout the TV universe to this day. Why? Because the multi-talented Lucille Ball was one of my female idols growing up. The reason? Unlike the moms on such family comedies as The Donna Reed Show, Leave It to Beaver or, heaven forbid, Father Knows Best, they were domestic goddesses who wore pearls and frilly aprons while happily caring for their broadcast clans. However, on-air, Lucy wasn’t so keen on being a housewife. But Lucy desperately wanted to be an entertainer like her musical husband Ricky.

What is most confounding is that Sorkin doesn’t embrace this ground-breaking sitcom’s funny business and instead digs down into the mud during a not very good week for the pair when, in 1952, Desi and Lucy endured a short-lived scandal when Ball was investigated by the House Un-American Committee when she signed up in her youth as Communist, just to please her beloved grandfather, who raised her. At the same time that week, gossip magazines were running stories of Desi’s infidelities while the show struggled to work Lucy’s own pregnancy into the show, turning the movie’s scope into what she calls “a compound fracture of a week,” after the gossip was leaked by the notorious columnist Walter Winchell.

All was cleared up for her fans during a live show before the taping, when Arnaz gets a call from FBI Director J. Edgar Hoover on the set and tells the live audience the only thing about Lucy that is red is her hair – and even that isn’t legit. The film ends with a title card saying Ball filed for divorce after the taping of their last show in 1960.

As for the documentary, Lucy and Desi, it is directed by Saturday Night Live alum Amy Poehler who knows how it feels to be a popular funny lady on TV, especially whenever she pairs up with former SNL partner Tina Fey. While Sorkin’s male gaze behind the camera never completely gets why, to this day, I Love Lucy continues to be a highly-regarded and influential sitcom. Her character was desperate to break into show business since her husband was a band leader who worked in a nightclub.

But what Poehler gets that Sorkin does not is that there was a ton of love oozing on that set between the couple who jointly built a TV empire. The fact that Lucy’s real-life pregnancy — a word that was then an on-air taboo — when Desi Arnaz Jr. was born was the first time such an event was shown on a TV show. What Being the Ricardos ignores is that Lucy and Desi continued to be connected with each other since they both shared their children and their TV projects.

Early on in the doc, Lucy and Desi’s daughter Lucie Arnaz Luckinbill, who also went into acting, says, “Under all this painful stuff and disappointment, at the core, it’s all about unconditional love.” Carol Burnett, who would perform with Lucy on her own CBS variety show, says, “She was fearless with her comedy. She was very physical.” Fan girl Bette Midler also chimes in, “She was a woman who was so beautiful and she wasn’t afraid of being ugly. That is something women rarely do.” That is confirmed by several images , including her getting a ton of water being poured on her by above, blackening her teeth, wearing a fright wig and other slapstick style antics.

“I don’t like when people call her work effortless, there was no advantage to being a woman in the TV industry in the 1950s, says Laura LaPlaca, the director of Archives & Research National Comedy Center. “She wasn’t a genius, she wasn’t innately talented. She really built her success. I’ve been studying Lucy since I was five years old. It is kind of clear that she has a scientific approach to what generates a laugh.” We then hear Lucy saying how she learned about something called “The enchanted sense of play.”

Yes, Desi was the straight man, one who reverted to his native Spanish whenever Lucy hatched one of harebrained schemes, but he also had a business mind as he created a way to use film stock in order to show I Love Lucy on both coasts and built up Desilu Productions, which produced other shows such as The Untouchables, The Andy Griffith Show, Star Trek, Mission: Impossible That Girl, The Dick Van Dyke Show and many others. We also get to see how both Lucy and Desi endured hardships in their early lives while growing up, including poverty. But both of them became self-made entertainers who brought countless joy to others.

OK, it always gets me in the episode known as Lucy is Eceinte, when Ricky is passed a note saying on his nightclub stage that a woman wants to reveal to her husband that she is expecting a baby. As he tries every table, he finally sees Lucy and she weeps while nodding yes. Just seeing it again, it causes me to cry every time.