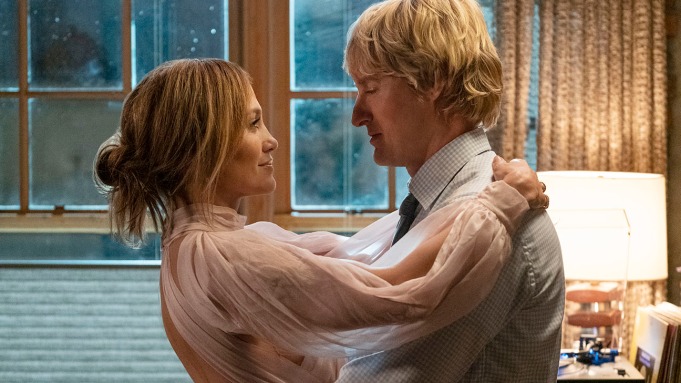 As sparkling and sweet as a glass of bubbly, the new romantic comedy Marry Me pours out an entertaining – if not earth-shattering – cinematic experience perfect for a lightweight date night or girls’ night.

Stars Jennifer Lopez and Owen Wilson stay firmly in their comfort zones, but their effervescent chemistry keeps the fantasy fizzing along for nearly two charming hours.

In an art-reflects-life role, J.Lo plays Kat Valdez, a self-made music superstar and mogul who has practically every waking moment sponsored, filmed and posted to social media. To go with their new hit duet “Marry Me,” Kat and her beau, fellow pop luminary Bastian (Colombian singer-songwriter Maluma), are planning to get married onstage during a sold-out New York City concert that will be live-streamed to millions worldwide.

Adorkable math teacher Charlie Gilbert (Wilson) and his lovable 12-year-old daughter Lou (Chloe Coleman) snag prime last-minute seats to the show after his best pal Parker (the hilarious Sarah Silverman) goes through a breakup. So, they have a close-up view when Kat finds out mid-concert that Bastian has been cheating on her.

Reeling from the damning video, Kat locks eyes with Charlie, who is holding Parker’s “Marry Me” sign, and says she will wed him instead. Sympathetic to her humiliating heartbreak, the divorced dad goes through with the onstage wedding.

Their improvised nuptials become a full-on media frenzy, especially since Kat is already a three-time divorcee. So, she and her savvy manager Collin (the wonderfully expressive John Bradley) ask Charlie to help them ride out the storm by sticking around for a few weeks, doing some joint interviews and at least making the appearance that the couple is getting to know one other.

Obviously, Charlie’s buttoned-down, social media-free lifestyle contrasts sharply with Kat’s frenetic, perpetually live-streamed existence. Naturally, Kat is attracted to Charlie’s unassuming charm, dry wit and devotion to his daughter and students, while Charlie is drawn to Kat’s drive, charisma and down-to-earth sweetness. Of course, he teaches her to slow down and enjoy the simple pleasures, while she encourages him to loosen up and have fun, to the tune of some catchy new pop songs.

Clearly, the story is a farfetched fantasy. But director Kat Coiro (It’s Always Sunny in Philadelphia) — working from a script by John Rogers (Leverage), Tami Sagher (Inside Amy Schumer) and Harper Dill (The Mindy Project), based on Bobby Crosby’s graphic novel — keeps it somewhat grounded in reality as the film touches on sexist double standards, the dangers of social media and the toxic realities of the 24-hour news cycle.

Mostly, though, Marry Me offers a couple of hours of fun rom-com escapism – and there’s nothing wrong with that.