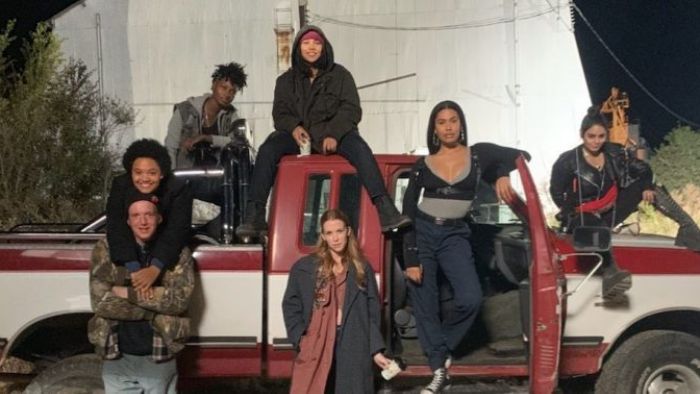 The satisfaction of seeing evil men get their comeuppance is the heartbeat of the edgy revenge film, Asking For It, where a cross-section of women from every background bond to fight the man.

Meet the vigilante Cherry Bombers, finding each other and connecting through shared past trauma. Together they vow to eradicate perceived enemies in a road trip revenge thriller with some extraordinarily tragic moments.

And there are plenty of bad actors to check off their lists, as the leader of a racist paramilitary operation that fronts as a men’s liberation movement, Mark Vanderhill (Ezra Miller), has whipped up a mob of incels and weak-minded men convinced women and minorities now have the upper hand in life despite “nature” and “biology” proving over and again that [white] men call the shots.

There are strong horror vibes thanks to the veracity in director Eamon O’Rourke’s ripped-from-the-headlines aspects of the film. First, we meet sweet Joey (Kiersey Clemons), who lives with her grandparents, played by Patricia Belcher and Wayne Dehart. Joey’s a happy-go-lucky girl who is a bit rudderless while she waitresses in a diner.

Enter an old buddy Mike (Casey Cott), now in law school, who invites Joey out for a fun evening and winds up doing her wrong after spiking her drink. This sexual assault sets Joey in a complete PTSD downward spiral as she doubts her worth. Her life begins to disintegrate until one of her diner regulars, Regina (Alexandra Shipp), comes to her emotional rescue through friendship and fellowship at a femme queer enclave club where Drag Kings, lesbians, trans women, and men can be themselves and party.

Joey is thrust out of naivete and finds she has a new group of unlikely friends who have her back. Fala (Casey Camp-Horinek) and Sal (Radha Mitchell) are the matriarchs and partners who keep order in the main house and offer a welcoming embrace to Joey, who warms to them immediately.

Of note, Vanessa Hudgens is reborn in her role as Beatrice, who is part of the posse of vigilante women out to end the reign of very corrupt police who are aiding and abetting crimes against women. And these very same cops also prop up Vanderhill’s men’s movement. Hudgens’ turn as this wounded sparrow turned bird of prey is part of snap and crackle in this ensemble.

Also, Gabourey Sidibe does a fine [albeit brief] turn cast as Rudy, an organizer who collects intel on their targeted enemies. These women lean into their inner warriors and emerge as proactive defenders of the traditionally marginalized and victimized.

O’Rourke’s directorial style exerts the film’s frenetic heartbeat in what feels like a race to prevent further crimes against women. And for fans of the 1979 classic film, The Warriors, the troublemaking gang leader Luther from that film is cast as the villain here, as Sheriff Morel. Actor David Patrick Kelly does not disappoint in his vile turn as a lawman who does anything but protect and serve.

Admirable too is O’Rourke’s efforts to create this percolating, heightened female empowerment yarn that takes on massive subjects—rape, entitlement, patriarchy, racism, homophobia, queer culture, police corruption—yet balances it with characters who defy the tropes and stand up and do the right thing.

Notably, the character of Sheriff Vernon, played by Luke Hemsworth, whose history with Sal and his decent caring character show that O’Rourke is balancing his storytelling with the fact that not all men are loathsome and not all women are saints, either.

Kudos to Lilah Larson’s score that keeps your attention and adds psychological urgency to the story, and DP Jendra Jarnagin’s lensing artfully captures the action and pulls you into the fray with the Cherry Bombers as they tear up the mean streets of Oklahoma.

Life may disappoint in the meting of justice for so many women, but O’Rourke and his cast of badass Bombers offer a nice fantastical kickass reprieve from its inequities.