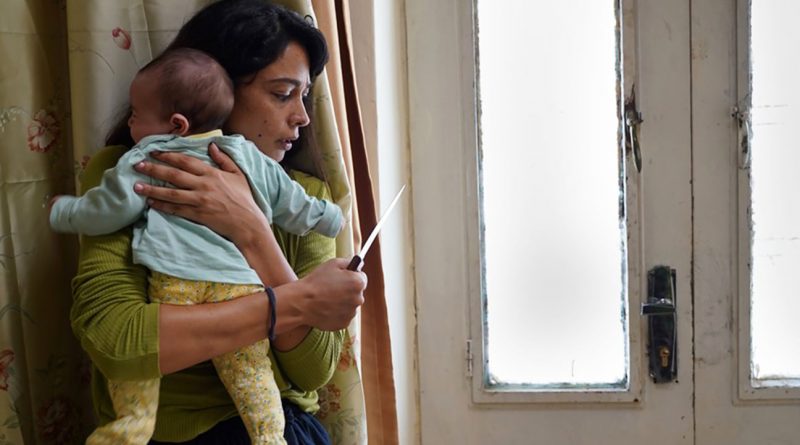 A new mother who wants a little pampering, time to herself, and chitchat with her hairstylist winds up fearing for her life in Huda’s Salon, a thriller that uses societal attitudes about women and honor to heighten her peril.

Set in the Palestinian section of Bethlehem’s West Bank, which Israelis walled off from the rest of the city in 2002, Huda’s Salon starts on a relatable note. With her infant daughter resting nearby, Reem (Maisa Abd Elhadi, Baghdad Central) relaxes at the sink of a small salon while Huda (Manal Awad, Gaza mon amour) washes her hair. Huda grouses about people doing their own hair at home, copying styles from YouTube. Reem notes that having a child makes her feel older. We get older anyway, children or not, Huda says.

She offers Reem a cup of coffee—innocuous enough, but soon Reem is unconscious. Huda swiftly opens a door to a back room, where she and a male accomplice undress Reem, place her on a bed, and take several Polaroid photographs of her with the man.

He does nothing but place an arm across her stomach, but this is violation enough. When Reem awakens, Huda admits that she’s a spy for the Israeli Secret Service. She shows Reem a photo and threatens to share it with Reem’s husband unless Reem provides her with any info she runs across about the Palestinian rebels. Huda has a contact who can pay Reem for her information, but even if she refuses, the photos are insurance that Reem will keep quiet.

Writer-director Hany Abu-Assad (The Mountain Between Us, Omar) swiftly tightens a noose around poor Reem, who is sure she’ll die once the Palestinian rebels snatch up Huda. Her husband, Yousef (Jalal Masarwa), has kind eyes, asking her, “Love, what’s wrong?” But he’s also the type of man whose insecurities create what he fears. He’s jealous enough without a Polaroid to set him off.

Plus, even though she’s innocent, Reem fears not being believed. At a doctor’s office with the baby, she overhears two women talking about a friend with breast cancer. The ill woman won’t tell her husband, afraid of divorce more than death.

Huda’s Salon cuts between scenes of Reem on edge while entertaining her in-laws with Palestinian rebels first killing Huda’s accomplice, then questioning Huda. Their leader, Hassan (Ali Suliman, Tom Clancy’s Jack Ryan), wants the names of all the women in Huda’s photos. Punish me, not them, Huda says. But Hassan isn’t inclined to work that way.

Avoiding the geopolitical details behind the area’s conflict, Abu-Assad ratchets up the strain on Reem while also giving Hassan and Huda remarkable depth. Elhadi is sympathetic throughout, conveying her torment in hunched shoulders, clutching her baby tight, or running her knuckles along the city’s concrete wall. The film uses natural sounds—the drone of a Laundromat, a shower, music from the baby’s mobile, the pings of a cell phone—to intensify Reem’s fears, her reactions like that of a cornered animal.

Huda at first seems despicable, but Awad’s performance reveals how she sees a bit of herself in the women she betrayed. She too was unhappily married, although unfaithful, and has children she can’t see again. She thought she was giving these women a chance to act out, their own rebellion.

Hassan doesn’t entirely buy this, but he has his own regrets, and as his colleagues circle closer to Reem, the film wonders how far one will go to save oneself as the options dwindle.

An absorbing if difficult watch, Huda’s Salon ends on an ambivalent note. Seeking an afternoon’s respite, Reem encounters a formidable trap, and whether she escapes is up to the viewer to decide.