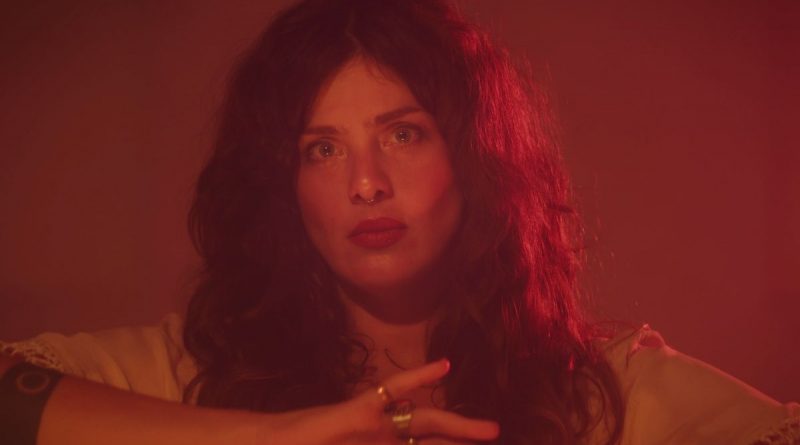 While the broader concepts of wellness and spirituality are wholesome enough, when it comes to the explosion of influencers in this area it becomes rapidly apparent that they are marked far too often by an almost signature flair for grift, albeit flimsily disguised as a kind of earnest altruism. This is consequently very much an area ripe for the picking for satire and black comedy, and Jay Buim’s Adventures in Success has heeded the call.

Leaving the rat race for a tranquil alternative lifestyle in the Catskills, a group of true believers join together under the guidance and leadership of Peggy Appleyard (Lexie Mountain), a self-defined “energy transformationist” who centers their attentions around the supremacy of “female energies”. Calling her group “Jilling Off” – as opposed to “Jacking Off” – Peggy is a self-styled sex cult leader (although she self-identifies as a “goddess”), and for men, membership forbids ejaculation and demands instead that the central focus be solely on the sexual pleasure to the group’s women. The world can only be healed, Peggy tells them, through the energy created from female sexual pleasure. The arrival of a young woman called Erica (Yaz Perea) marks the beginning of the film, and when an opportunity arises for the group to have a booth at a wellness expo they see their one big chance to woo investors and gain much needed venture capital to take the Jilling Off movement to the next level. But it doesn’t pan out quite as they expected…

Adventures in Success is, first and foremost, very very funny. It gleefully lampoons Peggy’s absurdity, hypocrisy and undisguised selfishness, which is all carried in an unwaveringly dedicated performance by Mountain who clearly relishes the excesses of her character. Yet it is Erica who we largely experience much of the film through, getting to know the other residents of Peggy’s “educational training center” through her eyes. As Erica is sucked deeper and deeper into the movement, there is a great tension between empathy and bewilderment on our part as we see her shift from an intelligent, autonomous person into someone altogether far more gullible.

As tensions grow between the group and the local community who live nearby – some support the vision of the Jilling Off crew, while others are openly hostile to it – the film avoids the feeling of being broadly “anti-feminist”, which is a trap it could have easily fallen into. Watching women in particular in the local community speak to what appeals to them about what the Jilling Off team are doing grants the film a much-needed balance, thus clarifying the source of its satirical ire is very much not Peggy’s feminist vision itself, but rather the overt, undisguised way she has packaged that for optimum grift. Adventures in Success is a sharp, ribald take-down of the wellness and spirituality influencer con game, revealed with hilarious precision from the inside.