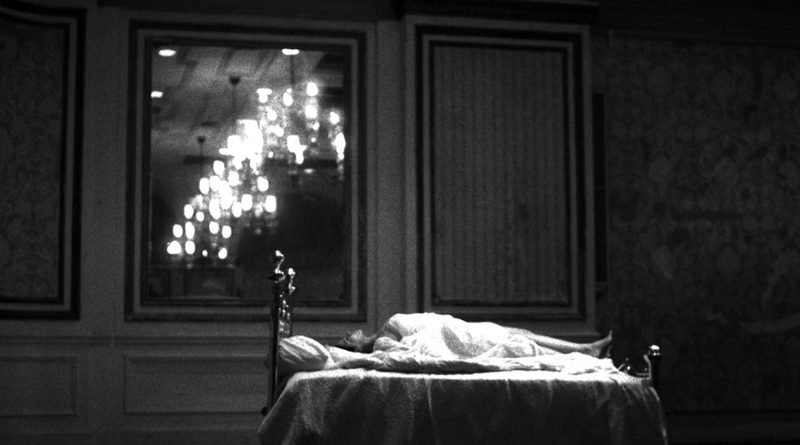 Experimental filmmaker Nina Menkes’ fourth feature, Phantom Love (2007), opens on a sex scene. The man on top of her main protagonist, Lulu (Marina Shoif), is thrusting with speed and vigor, but Lulu seems distracted, uninvolved, given to daydreaming through this carnal scene. Repetitions of this scene may lead the viewer to believe that Lulu is a prostitute (and certainly her name, though not really revealed during the film, suggests the wanton Lulu played by Louise Brooks in Pandora’s Box [1929]).

But no—this Lulu works in a casino, and the man is her lover (Bobby Naderi). They have a fractious relationship similar to that of her parents, shown arguing violently in a flashback sequence. The monotony of her job, which we see her perform several times in rote fashion throughout the film, seems necessary to keep her from losing her grip as her mad, self-injuring sister (Juliette Marquis) has done. Still, Lulu almost hypnotically consumes the televised violence of the Iraq War, and disturbing dreams invade her sleep—floating above her bed and exploding like a firecracker, having oral sex performed on her by her mother, merging with her sister.

Other images—a baby laying in a box abandoned in an alley, a moth crawling on Lulu’s bedroom lamp—are less clearly part of a dream. It is this permeability between the unconscious and reality (the latter of which can never be taken at face value in this film) that encourages the viewer to let go of the usual expectations of a story line with a logical resolution and allow the images to provide more subliminal, personal messages.

Phantom Love is a film that weds the director’s intrapsychic world with the formal innovations pioneered by surrealist artists and filmmakers of the first part of the 20th century, particularly the films of Luis Buñuel. Like Buñuel, Menkes populates her film with a variety of animals—an ant, bees, an octopus, some tetras, two Great Danes, a cat—but not in the absurd ways employed by the Spanish-Mexican director. Rather, Menkes has said that the images came to her while working with a psychic healer, and her familiarity with Jungian psychotherapy helped her accept and integrate the irrational elements of her unconscious into a film that reaches beyond mere character development.

The most evocative image for me was the boa constrictor Lulu approaches and steps around as she makes her way down a corridor to her home. In Jungian analysis, the home is the symbol of the self and the serpent is the symbol of psychological healing and wisdom. In the final scene in which the serpent appears, Menkes positions it in the foreground for the first time. Its larger appearance in the frame signals that Lulu’s healing may be nearing completion. It is a privilege that Menkes has shared this life-altering journey with us.