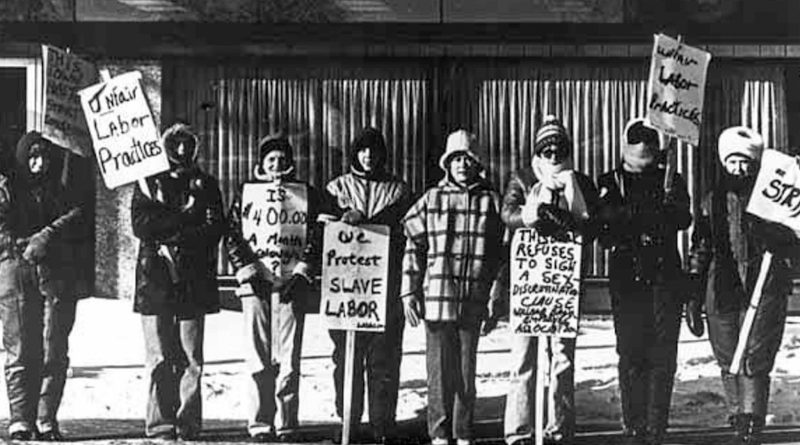 Many movie lovers remember Lee Grant as the extraordinary actor whose varied screen career, which began in 1950 and continues to this day, included roles in such seminal films as In the Heat of the Night (1967), The Landlord (1971), and Shampoo (1975), for which she won her only Academy Award. In 1973, Grant expanded her repertoire by turning to directing. While her directorial output contains feature films and television series, she may be most enduringly known as a director for her documentaries.

The first and perhaps most impactful documentary she made is The Willmar 8 (1981). Now little more than a vague memory or a footnote in labor history, the strike of eight women in the small town of Willmar, Minnesota, against Citizens National Bank for sex discrimination was a watershed moment in U.S. labor relations that led to a widespread investigation of unfair labor practices in the banking industry.

Beginning in December 1977, the women walked the picket line through two Minnesota winters waiting for the National Labor Relations Board to rule on their complaint. They drew national attention and the support of large unions for a time, but as the public’s attention wavered and moved to other things, the women found themselves isolated, short on money, and unable to secure even part-time work in Willmar to keep them going. All they had was each other and their doubts about whether they had done the right thing.

Grant does an excellent job of profiling this rural, conservative community, visiting a restaurant where residents repeatedly rebuff her requests for comment on the strike, attending a card game where some of the town’s women discuss whether feminism is a good thing or an insult to them as traditional women, and, of course, talking with the Willmar 8 themselves—Doris Boshart, Irene Wallin, Sylvia Erickson Koll, Jane Harguth Groothuis, Sandi Treml, Teren Novotny, Shirley Solyntjes, and Glennis Ter Wisscha.

The strikers ranged from a recent high school graduate to middle-age wives and mothers. All were fed up with being passed over for promotions and salary increases. The final straw was when a young man, the son of the bank president’s friend, was hired into a management position and the women were asked to train him. On the surface, their decision to form a union and strike divided the town, but quietly, customers refusing to cross the picket line caused a noticeable drop in the bank’s profitability.

Labor-management disputes, of course, are nothing new. In the wake of the changes wrought by the COVID-19 pandemic, all of us have become aware of just how bad some workplaces are for their employees. Many workers are opting out as part of the so-called Great Resignation and others are breathing new life into the union movement. Now is a great time to learn from and be inspired by labor struggles of the past. Now is a great time to watch The Willmar 8.

The Willmar 8 is the first of five documentaries directed by Lee Grant that will stream on MUBI this March.