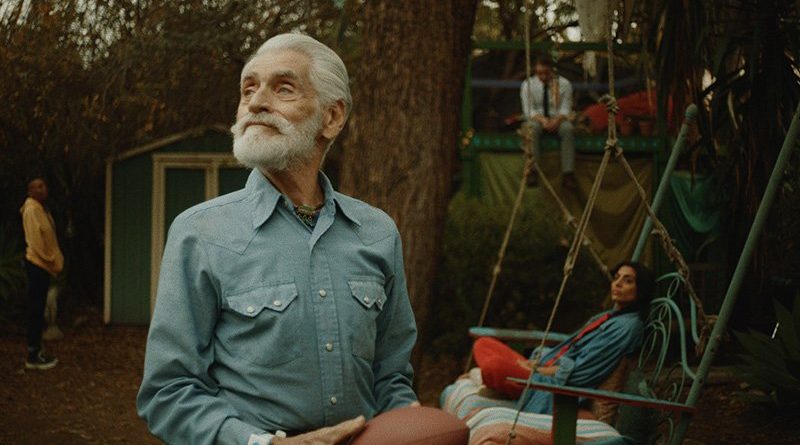 A comedy-drama about a subject – euthanasia – that can weigh a sentence like a lead balloon, Moon Manor is somehow whimsical, witty, and stirring enough to take flight. Making their feature debut, writer-directors Machete Bang Bang (TV’s I.R.L.) and Erin Granat pull off this unlikely mix thanks to a thoughtful script and a marvelous cast, anchored by an enchanting lead performance.

James “Jimmy” Carrozo also makes his feature debut in Moon Manor as Jimmy, a character whose colorful stories were based on parts of his own life, the end titles say. Yet this biographical connection doesn’t account for the range of emotions Carrozo shows, from impish humor to fear, confusion, and love. He’s delightful company.

Set in and around a Victorian house, Moon Manor takes viewers through the last day of the onscreen Jimmy’s life. Living with Alzheimer’s disease, Jimmy plans to die that evening – but first, he’s invited friends and neighbors to a party he calls his “FUN-eral.”

As he explains, he always thought it was stupid for people to miss the one party where others say how great they are.

The filmmakers take their lead from the free-spirited Jimmy’s tone, yet also manage to slip in poignant musings from the people around him. His guests include drag performers, talk-show host Rikki Lake, a couple he met during an eclipse, and two churchgoers (Richard Riehle, Office Space, and Galen Howard, Brooklyn Nine-Nine), who protest assisted suicide.

Also on hand are his caregiver, Remy (Reshma Gajjar); a death doula, Fritti (Debra Wilson, Star Trek: Prodigy), who plans to guide his spirit; and Andrew (Lou Taylor Pucci, You), a local journalist whom Jimmy invited. Relegated to writing obituaries, Andrew is thrilled to interview a subject who is still alive. He and Jimmy form a believable rapport, with Pucci’s understated performance showing that Jimmy is a person Andrew won’t soon forget.

In his youth, Jimmy sold land on the moon as a novelty, similar to people buying a loved one a star in their name. It was like selling hope, he tells Andrew, watching people feel like children again.

Yet before he was the “moon man,” he was a musician who met the love of his life, Ricky, in the sixties while they auditioned for the musical Hair. As he recounts their meeting and other segments of his life, the directors pan through the house to another room, where younger actors reenact those flashbacks. Placing those moments within the house, albeit lit differently to change the setting, adds subtext to Jimmy’s memories, as if they’re with him everywhere.

Jimmy readily jokes about having Alzheimer’s; he tells his guests not to RSVP, as he’s forgotten he invited them. But he’s given his plan substantial thought. When a relative tries to talk him out of it, he says that his thoughts and personality are what he lives for. “If I can’t be me, and I mean everything that means, I just don’t want to be,” he says.

The filmmakers intersperse home videos of the real Jimmy and Ricky from their performances with the overall story and other glimpses inside Jimmy’s mind. A tall, masked figure dressed in silver with a half-moon shape on their head pops up at a few moments as Jimmy’s intuition. Jimmy also literally talks to different forms of himself, the others questioning whether he’s doing the right thing and voicing his fears.

Viewers might not agree with Jimmy’s choices, but the filmmakers create a well-rounded soul whose zest for life seems contagious. Jimmy’s career might not have made him a household name, as he tells Andrew, but that “doesn’t mean we didn’t earn our place in the stars.”