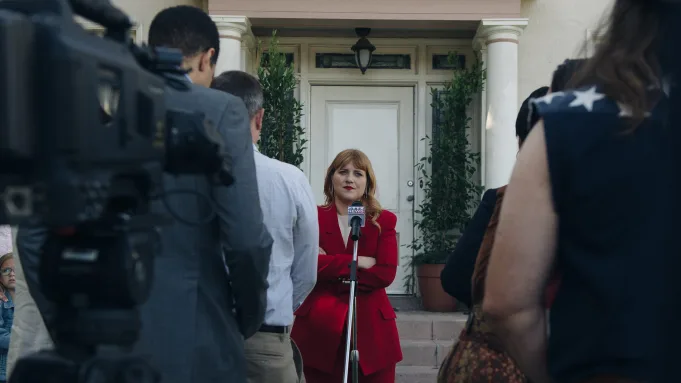 Joey Alley is a sort of a one-woman band as she makes her feature directorial debut based on her own original screenplay while starring as the main character in The Hater. As Dorothy Goodwin a California resident, a dedicated environmentalist and a liberal speechwriter on a U.S. Senate campaign who loses her job after al protest about a flag goes wrong. This political comedy layers on such hot-button topics as gun control, abortions, climate change as well as support for our veterans. Dorothy soon realizes that her bullying childhood nemesis Brent (Ian Harding), who beat her when they both campaigned for class president, is now running for State Legislature as a GOP candidate.

She decides to return to her conservative hometown of Alabaster, Texas, and to run against Brent as a Republican opponent. She also reunites with her estranged grandfather Frank (Bruce Dern) and moves into his house. Dorothy also ends up bumping into her grade-school frenemy, Greta (Meredith Hagner). She brings Dorothy to a free luncheon at the Alabaster Women’s Chamber of Commerce, run by Genie (Nora Dunn), a town matriarch.

With Greta as her campaign manager, Dorothy gets to know the female citizenry of the town and listens to their concerns. When she stops an armed robbery at a local store, she rises at the polls. But what she really wants is to do a switcheroo and run in the guise of a Republican. But, instead, she finds a loophole that would allow her to force a victory for a Democratic female candidate, who has run four times before but never won.

But Dorothy’s real triumph is how she eventually embraces her family roots and reconnects to the people she left behind. That includes her late grandmother’s old clothes, which come in handy while on the campaign trail. She also comes to accept the too-soon death of her gay father, who was a popular teacher at her middle school. In doing so, she allows herself to love herself as well. Of course, the most important player is Dern, who is the kind of loving grandfather who can forgive and forget.