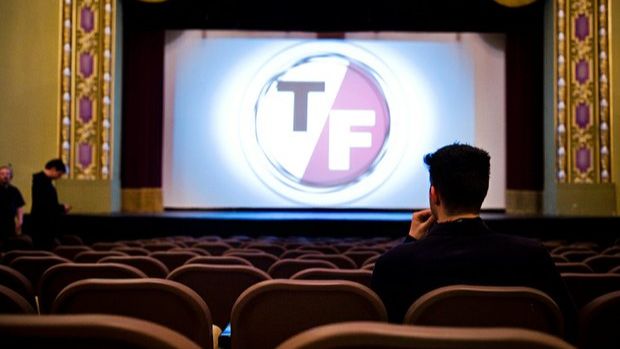 The True/False Film Festival, now in its 19th year, offers a documentary extravaganza traveling the world through a diverse global lineup. Last year they moved outdoors with a pared down schedule, but True/False was resplendently back in person, full force, this March 3 to 6 with twenty-five features and three shorts programs, plus five short films preceding features. Filmmaking techniques varied from the one camera/do-it-yourself productions to relatively extensive crews and two all-archival footage films interpreted with accompanying voiceover narration.

Among several unique aspects of the fest, live music greets viewers as they enter every venue, individuals or groups playing on stage, often too loudly, but always with passion and considerable talent. The university town of Columbia, Missouri, turns out and supports the festival with outdoor music, sculptures at various areas, venue captains dressed in flamboyant costumes, and a lively parade with participation encouraged. As welcome as all of this is, the programs always start on time, a much appreciated aspect of any fest for attendees with full schedules, as I had. A quick comment from the director, producer, or editor (sometimes by Zoom when individuals can not make the trip to Columbia) introduces the film, and the screening commences. Another unique and wonderful bonus of True/False is the Q&A after every feature, first with knowledgeable True/False representatives interviewing those involved with the film and then with questions from the audience. This additional information gleans special insights that enrich every event.

Not surprisingly, most of the fifteen documentaries I saw focused on serious subjects, a handful sampled here but all worth viewing and reflecting on long after each screening. Director Alex Pritz’s The Territory documents the decimation of the Amazon rainforest from the perspectives of the Indigenous Uru-eu-wau-wau people who inhabit this area in Brazil and from that of the encroaching settlers and farmers who cut the trees, burn the forest, and threaten environmental activists. Among the Uru-eu-wau-wau, the charismatic Bitaté and Ari refuse to capitulate to the invaders, commenting that “being indigenous is resistance.” With remarkable access, making clear the interlopers receive support from big agriculture and corporate business, Pritz listens to and follows both groups through tragic confrontations.

Furthering its commitment to international issues, Diem HÀ Lê’s Children of the Mist takes us to North Vietnam mountain homes of the Hmong where fourteen-year-old Di confronts the tradition of “bride kidnapping.” Against that backdrop, Di’s daily activities reveal the rich Hmong community but also the alcoholism, lack of education, and restrictions on women’s autonomy. Diem HÀ Lê’s extraordinary access to routine, casual exchanges benefits her aim to accurately illustrate this ordinarily isolated, remote culture.

By contrast, with theoretical control over their circumstances that are nevertheless fundamentally constrained by financial difficulties, the men in Factory to the Workers face the bankruptcy of their ITAS machine tool factory in Northern Croatia. Shot over five-and-a-half years as a one-person endeavor by director Srdan Kovacevic, with all the scenes within the factory offices and production areas, the worker-owned business fights to survive with a manager failing to solve problems. As Varga, a leader, explains regarding the ten years of hard labor since the group took the reins, “We the older workers are doing this for you younger men, so you have a future to be proud of.” Nonjudgmentally, effectively, Kovacevic captures the monumental hurdles, including suggestions of corruption.

More upbeat films provided a needed boost, primary among them Let the Little Light Shine, a tribute to the activists who saved the NTA (National Teachers Academy) elementary school serving a largely Black South Loop community. A top Tier 1A+ rating does not deter the Chicago Public Schools from threatening to convert this superior institution to a high school, gentrification on full display. Therefore, answering the need, an everyday individual, parent Elisabeth Greer, embraced the responsibility of a leader, coordinating protests in the streets and at school board and City Hall meetings, involving Chance the Rapper (until the public schools’ bureaucracy explicitly excludes him), and more. Watching the determination and growing momentum to save a vital elementary school is as inspirational as it is electric, with scenes of daily activities in the school revealing the unsurpassed, supportive education taking place. The screening I attended, the first public one, was a landmark in my cinematic experiences, with the audience directly involved in every twist and turn, shouting, applauding, cheering, and talking back to the screen. Standing ovations that went on for minutes greeted director Kevin Shaw, Elisabeth Greer, the school’s principal Isaac Castelaz, producer Rachel Dickson, and NTA student Taylor Wallace as they took the stage. POV has scheduled a December 12 broadcast not to be missed unless you’re fortunate to have an opportunity to see it sooner.

Equally impressive, with a dazling creative flair, director Jon-Sesrie Goff’s After Sherman interweaves animation, archival images, direct address, and contemporary events in the interrogation of Black history in U.S. southern coastal regions. Historically grounded in Georgetown, an emotionally cherished home fraught with racist incidents, this experimental, imaginative contemplation of memory, legacy, and community includes exchanges between Goff and his father, Reverend Dr. Norvel Goff, interim pastor at Emanuel African Methodist Episcopal Church after the 2015 Charleston murders. Multifaceted, complex, and mesmerizing, After Sherman will also air on POV and is not to be missed.

Finally, though I could go on and on about the diverse experiences the True/False selections offered, I’ll conclude with nods to Pawel Lozinski’s quirky The Balcony Movie (every shot taken from his balcony over the course of two and a half years), the terrifying and astonishing volcano footage woven together in Sara Dosa’s Fire of Love, the courageous and impressive Reid Davenport who foregrounds his cerebral palsy in I Didn’t See You There, Joe Hunting’s one hundred percent virtual reality creation We Met in Virtual Reality, and the surprising, previously unexplored history analyzed in Sierra Pettengill’s Riotsville, consisting entirely of archival footage from 1967 to 1970, with unsettling connections to recent clashes at protests. This cavalcade of films, some evoking sober realization of somber events, others amusing, all of them enlightening, is a credit to the True/False programmers. Expansive in topics, their selections hail from Bosnia to Brazil, Poland to Vietnam, Chicago to Croatia, Lebanon to Mexico. Exceptional and memorable, they encourage a profound and critical awareness that we do inhabit one world in all its glorious beauty and with its challenging problems that only we all can solve when we work together for a better, more just acceptance of all the cultures and people.