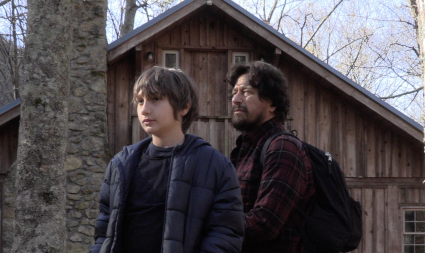 The Issue With Elvis is a little gem of a film about a wise child and a reclusive scientist who become friends. It’s a simple and surprisingly powerful story, graced by smart writing and lovely performances. Writer/director Dr. Charlotte Wincott cast her husband and son in lead roles, and made the film for less than $25,000. The Issue With Elvis has garnered great acclaim on the festival circuit and is available world-wide on digital release March 15.

Jeff Wincott stars as Dr. Mercer, a retired botanist with a special interest in mushrooms and fungi. He’s a loner living in rural West Virginia. On his nature walks to collect samples, he crosses paths with a runaway, a boy with a difficult family background.

The professor realizes that the boy (Wolfgang Wincott), who says his name is Elvis, has been abandoned in some fashion; he speaks to Elvis as an equal, drawing him out in conversation and slowly getting the picture of how Elvis happens to be on his own.

They are both lost souls, man and boy. The development of a friendship between the two is what the film is about, and most of that conveyed through spirited dialogue. There’s nothing sentimental going on here; the professor never talks down to Elvis, and Elvis feels free to speak his mind.

Elvis isn’t looking for a father. He already has one. The problem is that Elvis’ dad is coping with severe mental illness, and the child doesn’t know where his father is. Dr. Mercer can help Elvis with that. And Elvis can help Dr. Mercer rediscover a sense of purpose.

The Issue With Elvis is a character-driven drama with a good heart, and it addresses serious issues around mental illness.

The film has been hugely successful on the festival circuit, winning more than a dozen awards for acting, directing and screenplay, and three for Best Feature. Not bad for a debut narrative feature.

Wincott wrote, directed, shot and edited The Issue With Elvis, co-produced with Jeff Wincott and created a soundtrack (with musical input from her father and brother) that includes her singing. Not bad for a neuroscientist, which is her day job.

After finishing a PhD in neuroscience, Wincott set out to make movies with scientific themes in her films, and did so in three award-winning short films (Ping Pong Pigeons, Platitudes, and Dystopian Snow Globe) that touch on subjects related to psychology. She has also completed a documentary feature called Fall Fight Shine that investigates substance use disorders; it had a debut in L.A. last October at the Hollywood Women’s Film Festival, where it won Best Documentary and where Wincott was honored with the Activism Award from the Hollywood Women’s Film Institute.

In a recent interview, Wincott said The Issue With Elvis began to take shape in her mind during family walks in the woods and parks near her home in D.C. Her son kept asking questions about the different kinds of mushrooms, and Wincott drew on what she could remember from her studies years ago as a biology student. From there she started creating a story about a fungi scientist and a runaway kid.

“It’s a sweet story that puts something good into the world,” said Wincott, noting that the movie fits in the family-friendly category. “We’d love for kids to see this. So many kids have these experiences. Not everybody has the whole white picket fence experience. A lot of kids have a parent with mental illness, some more severe than others. Even families that seem perfect have their own dysfunction.”

Wincott knows the territory. Her father and stepmother are writers and academics; her mother struggled with alcohol use disorder. “I played alone in the woods and rivers, played outside until late,” she said of her own childhood. “I was by myself a lot of the time. But I was a learner. That’s how I coped.”

Having put some of her own experiences into creating The Issue With Elvis, “the story and the script seemed to come out of me pretty fast,” said Wincott.

And then the film was made on a micro-budget. “But you really don’t need all the bells and whistles if you can show a relationship like this that’s so relatable,” she said. “It’s the real character stories that hit at the heart of people.”