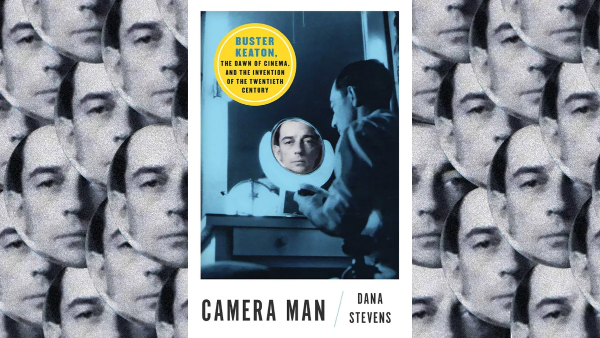 Buster Keaton certainly deserves the enduring praise his technical and aesthetic achievements have earned over the years. With this in mind, fans and scholars may wonder if his career warrants a new book. Happily, and perhaps surprisingly, Dana Stevens’ Camera Man: Buster Keaton, The Dawn of Cinema, and The Invention of the Twentieth Century (New York: Atria Books, 2022, 413 pp) confirms the answer is a solid “Yes.” Stevens’ research proves so much more has remained to be said, primarily and essentially in the realm of cultural contextualization as well as acknowledgement of Keaton’s comic creativity and personal problems.

Chronologically organized, Stevens begins with the Keaton family touring vaudeville act, Buster’s close and enduring friendship with Roscoe Arbuckle (his closest pals did not call him “Fatty,”) ventures into feature films, his degrading experiences with MGM, and the toll his alcoholism took on his work and relationships. In addition, and most impressively for today’s hot button issues, Stevens explores the social environment intelligently and thoughtfully. Topics include the representation of women and minorities, Keaton in black face (eighteen times), and Keaton’s hazardous behavior, especially his risky stunts.

Stevens integrates her informative, expansive contextualization of Keaton’s world into the timeline of the most significant events as they occur and develop. She thereby adds helpful information that facilitates a more complex grasp of Keaton’s physical and psychological milieu. Notably, Kendall details Keaton’s exposure to and knowledge of previous works that he reshaped into his inspired, unique comic events. For example, Stevens notes that Keaton “must have caught the industrial short ‘Home Made,’ produced by the Ford Motor Company” (145) the year before releasing his One Week in 1920. This detracts in no way from the remarkable, extended invention of his astonishing concept. In fact, Stevens credits his ingenious transformation of the well-known Sears Roebuck precut building materials (available beginning in 1895) into such a riotous situation.

Similarly, and balancing her assessment, Stevens describes what is, by today’s standards, several cringe moments; for example, Keaton’s use of blackface in the restaurant scene in College, 1927. While Stevens notes that “most movies made in the 1920s – can’t help but reflect the conditions of their time” (133), nevertheless, she analyzes the unfortunate, crude stereotyping which can’t help but offend today with “blindness to the deeper and uglier inequities that reinforced the practice of blackface . . . oblivious to the brutal social conditions that permit the scene’s ‘humor’ to work” (223). In that regard, Stevens summarizes Bert Williams’ “original and complex character” (219), his extraordinary performances that led Keaton, later in life, to express his admiration for Williams as “one of his top two favorite stage comedians” (222), despite his “condescension toward Williams” (224), an illustrative “example of that complex cultural encounter in action” (225). This accurate and necessary perspective enhances our historical as well as personal understanding without sacrificing dismissal for past, egregious behavior and practices.

Never losing track of “Buster’s character, whose defining trait is his ability to move through chaos while remaining miraculously unperturbed” (154), Stevens traces Keaton’s many iterations from the shorts to the silent features and his miserable life in his MGM years (294). In addition, Keaton’s alcoholism receives the attention it deserves as it impacted and exacerbated his personal and professional problems. Included are brief descriptions of the origins of AA, Keaton’s “evasive defiance” (309), his self-defeating denial, and his enablers’ efforts, as well as those who attempted unsuccessfully to intervene. Stevens connects Keaton’s alcoholic “furniture massacre” (310) to his father’s similar, deliberate destruction of property. In fact, throughout Camera Man, Stevens regularly keeps early actions and ideas integrated into discussions later in the book, thereby assembling a three-dimensional through line in this admirably complex portrayal of the man, unquestionably one of the comic geniuses who tragically, but thanks to Stevens, unmistakably did not realize his true potential due to his own imperfections as well as societal circumstances. In that latter regard, the transition from silent to sound films and from Keaton’s independent filmic control to the studio system triggered and contributed mightily to Buster’s misfortunes.

Camera Man offers a much richer profile of Keaton and twentieth-century America than my brief, selective commentary here indicates. Numerous times, Stevens describes astutely and carefully the intricacy of his performances and his situation. She describes the way “The Comiques [during the Arbuckle years] combine such cruelly retrograde ‘jokes’ with an at times avant-garde degree of filmic innovation. They swing freely, sometimes in the same scene, between savage cynicism and an almost pastoral sweetness” (100). She emphasizes the “contract he implicitly makes with his audience—that he will dazzle us, confound us, make us laugh or gasp once per second, but never let us past the opaque screen of his face—depends on a foundation of infinite reserve” (102). She teases out the “moral meaning” (152) of his early two-reelers, ways “Keaton was formally innovative, inclined to puncture social pretension, and given to making art that was, in a uniquely 1920s way, sardonic and romantic at once” (137), and the accomplished way “story and action are fully integrated” (153). She convincingly praises Keaton’s silent comedies as “playful, nimble, and buoyant, curious about new technology, allergic to pretense and sentiment” (196).

In her analysis of The General, now recognized as one of the greatest cinematic classics, Stevens explores its negative critical reception, the “use of comic violence in the service of an essentially apolitical story” (192), noting that “like the Three Keatons’ old stage act, The General sought to elicit gasps as often as it did laughs” (200). She further perceptively sees that in his unfortunate MGM days, “Keaton’s slightness of build became a pitiable lack of masculinity; his stoic reserve turned into dull incomprehension; and his characters’ heroic struggle to master the material conditions of their world (technology, the laws of physics, the elemental forces of weather) was reduced to mere clumsiness” (260). She describes the problem pairing Jimmy Durante with Keaton, “a gruesomely ill-matched pair. Durante’s gonzo energy washes Keaton out, making his stillness look like inertia and his diffidence like passivity” (288).

Yet, even in his bad years, she never sells him short; noting, for example, that even the embarrassing “dreary talkies Keaton made at MGM had at least one good scene, a moment when he managed to . . . become the performer he still knew how to be” (293). Furthermore, she incorporates into her information brief biographies of the people important to Keaton and significant details of their lives: Roscoe Arbuckle, Robert Sherwood, F. Scott Fitzgerald (with sad parallels there), and his three wives. Added to this is a helpful description of film production practices and the heavy hitters in Hollywood.

There are numerous, scholarly articles on Keaton’s films, in addition to several books, including Keaton’s own My Wonderful World of Slapstick, Buster Keaton with Charles Samuels (1960); Rudi Blesh’s Keaton, (1966); Daniel Moews’ Keaton: The Silent Features Close Up (1977); Tom Dardis’ Keaton: The Man Who Wouldn’t Lie Down (1979); Andrew Horton, ed. Buster Keaton’s ‘Sherlock Jr (1997); this year’s James Curtis’ Buster Keaton: A Filmmaker’s Life (2022), and many, many more. And yet, added to literally reams devoted to Keaton’s life and work, Camera Man achieves what a thorough, insightful portrait should: it presents the subject as a complex human being, succeeding and failing, generous and foolish, inspired and self-defeating, and, in the case of Buster Keaton, a comic genius of his very distinctive time.