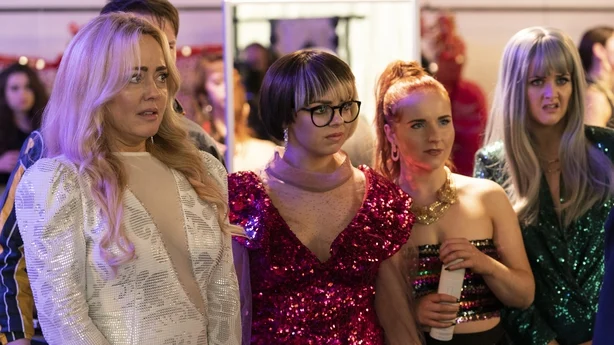 How do you like to observe St. Patrick’s Day? Raising a pint of Guinness or a tipple of Tullamore D.E.W.? Reading W.B. Yeats’ revelatory poetry or James Joyce’s revolutionary prose?

Perhaps you prefer a cinematic celebration of the Emerald Isle — the vintage charms of The Quiet Man, for example, or something along the lines of the current Oscar contender Belfast.

If the latter titles are too polite to suit your mood, however, the boisterous shenanigans of Deadly Cuts offer a raucous alternative.

The movie shares its title with a hair salon in the aptly named Dublin neighborhood of Piglinstown (played by Dublin’s real-life Finglas district).

Piglinsgtown may be rife with rough-and-tumble life, but it’s also rife with challenges — from above and below — as experienced by the denizens of Deadly Cuts.

Led by indefatigable owner Michelle (Angeline Ball, who long ago starred in a much better Irish tale, The Commitments), the crew includes the tart-tongued Stacey (Ericka Roe), longing to join her mother at a posh European shop; timid Chantelle (Shauna Higgins), the resident hair-coloring whiz; and Gemma (Lauren Larkin), forever ready to commune with inner spirits.

Not easy to do in a hardscrabble place like Piglinstown, where danger lurks on two fronts.

The more immediate threat comes from thug Deano (Ian Lloyd Anderson) and his lowlife gang. But slimy local politician Darren Flynn (Aidan McArdle), with his plans redevelop — and gentrify — the entire area, could pose an even greater menace.

Unless, of course, our plucky heroines can triumph at “Ahh Hair,” billed as “Ireland’s most elite hairdressing contest.”

To do so, they’ll have to win over superstar stylist D’Logan Doyle (Louis Lovett) — who’s so celebrated he even has his own theme song — and counter the conniving Pippa (Victoria Smurfit), a reigning member of the Eire hair aristocracy known as “the highlighted circle.”

Making a frenetic feature debut, writer-director Rachel Carey creates a persuasively gritty setting populated by colorful characters — some so vivid they go from character to caricature to cartoon in record time.

Speaking of record time, that’s also Carey’s approach to the movie’s hit-and-miss pacing, jumping from one outrageous bit to another without waiting for individual sequences to make an impact.

That’s probably just as well, considering how much trouble Deadly Cuts has figuring out its essential nature.

Sometimes it’s a cheerfully endearing romp carried by the scrappy stylists and their salon regulars. Except for the times when it’s a dark, deadpan crazed comedy marked by undeniable violence.

Like its main characters, Deadly Cuts can’t quite decide what it wants to be. That doesn’t make it unpleasant — only more unsatisfying than it would be if it could only make up its mind.