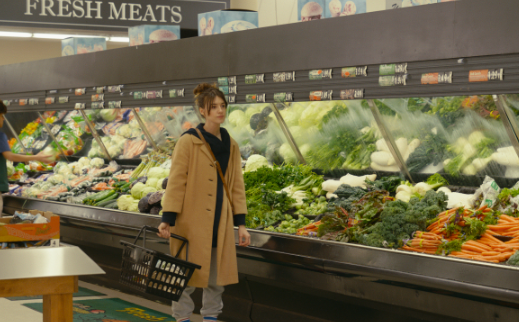 Do you like psycho-thrillers? What about horror comedies? If so, dark, devious Fresh might whet your appetite.

In Portland, Oregon, twentysomething graphic-designer Noa (Daisy Edgar-Jones) is sick of callous, cheapskate, on-line dating app disasters, so she’s a bit cynical when a charming, attractive young man, Steve (Sebastian Stan), tries to pick her up in the produce aisle of the local grocery store, urging her to sample the surprisingly delicious ‘cotton candy grapes.’

Noa’s bisexual best-friend Mollie (Jonica ‘Jojo’ T. Gibbs) immediately tries to find out more about this Steve on Google and Instagram only to discover that he’s not into social media. Is that a red flag in the 21st century? Suspicious Mollie thinks so, but Noa’s already hopped into bed with Steve and is looking forward to a surprise weekend romantic getaway.

As a successful plastic surgeon, Steve has a stunning contemporary house in the woods, so that’s where they’re going to spend the first night. At first, Noa’s dismayed that there’s no cell service in that remote region, but then Steve makes her a delicious Old Fashioned with ‘lots of cherries’ that knocks her out.

Cue the titles and cast credits which don’t appear until 33 minutes into the story.

When Noa awakens, she’s chained to a mattress on the floor. When she demands to know what’s happening, sociopathic Steve calmly explains, “I’m going to sell your meat.”

His seemingly luxurious home also serves as a queasily grotesque dungeon for other women too, each confined to her own cell. Steve periodically mutilates them, selling their most succulent parts, sending them off to an elite group of cannibalistic clients.

On the Granger Gauge of 1 to 10, aptly named Fresh is a sadistic, stomach-churning 6, streaming on Hulu.