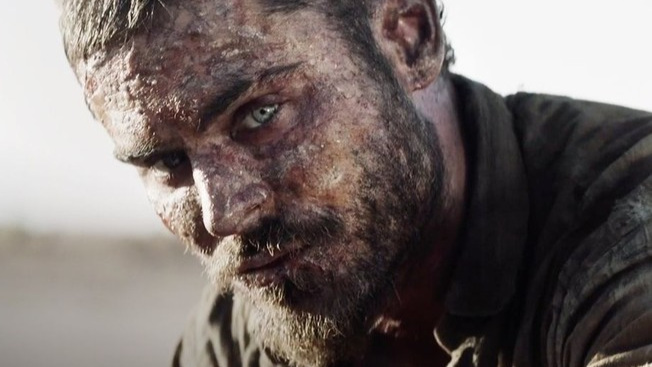 Gold is NOT about that high priced, highly valued commodity we know as gasoline. It is about a giant, shiny nugget that’s hidden in the sand of a near future dystopian desert and about what that nugget does to the two men who find it. Zac Efron stars as one of those men who lets the potential for a fortune get the best (or worst) of him. As a matter of fact, his character is just named Man One. That’s because Gold is a minimalist film with few actors and one location, but it’s a film that’s big on imagery. We’re to believe Efron hasn’t bathed in weeks. His pretty boy face is scarred and sunburned. He doesn’t sing, he doesn’t dance. This isn’t Beach Blanket Bingo, but a sandy game of greed and survival in an unforgiving desert with minimal supplies that are meant to last for several days as Man One protects his valuable find. Spoiler alert: No Hanukkah miracle happens here. Efron endures extreme temperatures, scorpions, snakes, dust storms, wild dogs, a mysterious woman scavenger and Methodists (obligatory Blazing Saddles reference) as he awaits help from Man Two. Gold is the perfect film for Efron to show his acting skills and convince us he’s not just a matinee idol…and he does. But, unfortunately, the story isn’t up to 24 karat standards. Billed as an action thriller, Gold relies on creative camera work to capture the intensity of the narrative, but overall could use some polishing. Ricky gives Gold 2 eyes open under protective goggles