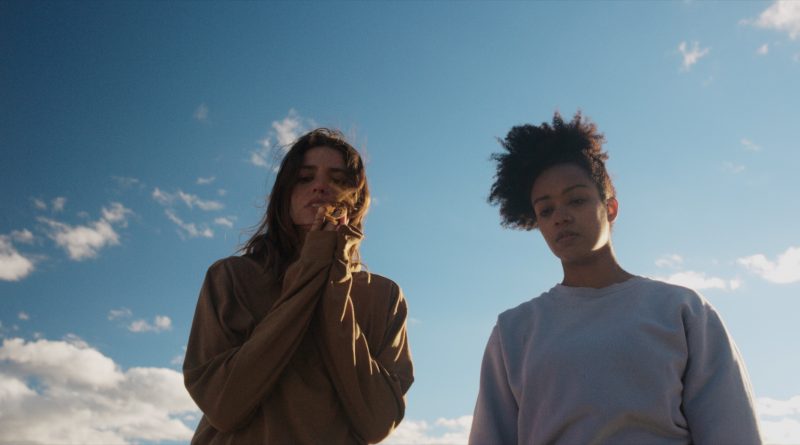 It’s night, and through a shaky, hand-held first-person camera we approach a car where a couple are having sex. It’s a desolate urban area, but as we spy on them, we at least realize that their privacy is not been assured. We stalk them. Moving into the car, we hear the man but we do not see him. He talks to Elena (Callie Hernandez), who tells him her story which we see in flashback as the film itself begins in earnest. Living in her late grandmother’s isolated cabin in New Mexico, Elena tells of reconnecting with an old high school friend called Jessica (Ashley Denise Robinson) who, she reveals, is being stalked by an unrelenting creep called Kevin (Will Madden). When Kevin finds them, Elena and Jessica realize that nothing will stop him – not even death – and decide that they need a different strategy if they wish the harassment to stop.

Directed by Peter Ohs and co-written with his cast (including Hernandez and Robinson), Jethica is on the surface a relatively straightforward enough film, but it is that simplicity that grants it an almighty force. When represented in film, stalking as a criminal offence and a method of physical and psychological abuse is rarely ever captured properly; something about its particular insidiousness more often than not sees filmmakers go either too far and ramp up the melodramatic excess, or else its downplayed or tacked onto other forms of gendered violence for a bit of added oomph. Jethica is one of the (very) rare films that gets stalking right, and it is precisely because of its low-key yet central supernatural conceit; instead of a moustache-twirling villain, the stalker here is never empowered, and remains the pathetic and desperate loser that he most certainly is. The fear that he instils in Jessica stems not from his charisma or strength, but rather from the very banality of his obsession – he is unrelenting not because of his power, but because he has nothing else in his life to do.

If using the language of horror to so precisely articulate a phenomenon so rarely captured on film so well was not impressive enough, Jethica takes full flight when it comes to the relationship between Elena and Jessica as they work through the peculiar circumstances they find themselves in. Earnestly and sincerely committed to the supernatural aspect of the tale, this doesn’t diminish the significance of the stakes and it is Jessica learning to trust Elena, to seek help, that provides the emotional and thematic core of the film. Not despite but because of its engagement with horror’s codes and conventions, Jethica is a profound, emotionally intelligent and sensitive portrait of stalking, a subject whose screen representation is long overdue such a considered treatment.