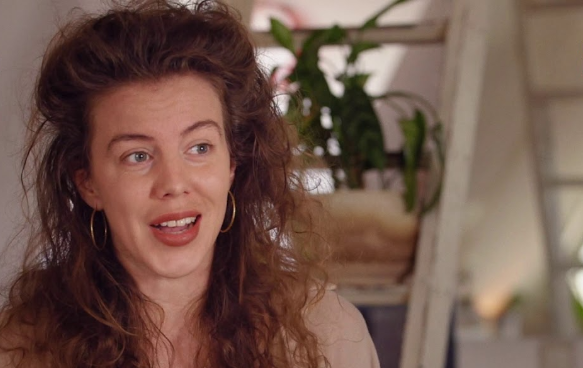 Master of Light, a new documentary and the feature debut for filmmaker Rosa Ruth Boesten, has premiered at SXSW 2022. The film is executive produced by renowned filmmaker Roger Ross Williams, and was made in collaboration with subject and artist George Morton, who honed his talent as a classical painter while incarcerated in federal prison for dealing drugs. Morton is a Black man who has chosen to confront the damage he has sustained by intergenerational trauma and systemic racism both personally and as an artist. Since his release, he has worked to rise above his own and his family’s history to become a success in the white-dominated art world.

Boesten, who filmed Morton over 4 years, follows the artist as he returns to his hometown of Kansas City. There he works to heal and nurture the relationship with his mother and extended family, including his sister and the at-risk nephew he mentors and loves. Morton commits to painting them in the style of the Dutch Old Masters, inspired by Rembrandt and the other anointed white artists of the time considered artistic geniuses.

Master of Light refers to so many things. The artist is trying to find more light inside himself and become more positive (which George talks about in the film), and is in search of the connection to the masters who used light in their work with such power and precision. He is also calling upon the light to move beyond generational trauma. George’s quest to sharpen his skill as an artist, and his determination to grow past a racist society’s expectations of him, really does require him to become a master of seeing the light inside darkness.

I spoke to Boesten about her experience working with George Morton, how the film changed her, and bringing attention to the vast potential and talent our society stands to lose by the racially-biased mass incarceration continuing to happen in America.

Leslie Combemale: What kind of art disciplines do you take part in yourself, and what drew you to doing the short films with artists you’ve done from the beginning of your career as a filmmaker?

Rosa Ruth Boesten: I’m interested in many different kinds of art forms. I create music, I’m a painter, I do cinematography, and I also do editing. So I’m interested in many art forms and that’s why I think it’s so inspiring to work with artists, because all those elements come together, and I’m able to use all those elements to tell a story and to really enhance the emotions that I capture organically. Before this feature, I had been making shorts about artists. For example, I made a short film about a glassblower, a woman who made amazing pieces of artwork. The very first documentary I ever made was about my grandmother, who was a textile artist and made beautiful works of monumental textile art, and I was so moved by her work, because each work told a whole story, and had a connection to her own life. I made that when I was 18, and actually used that film to apply for the Film Academy, but then a seed was planted to work in collaboration with artists to search for what artists express through their art that maybe they can’t express in words.

LC: You had a strong and personal connection with your grandmother. In what way did that prepare you to make Master of Light, or was it a completely new experience?

RRB: It’s very different to make a story about someone who’s from a completely different background than I am. With my grandmother, we have a relationship, and she felt comfortable with my presence. With this film, we really had to build that trust and have a lot of conversations about what George wanted to bring out into the world from his story and his life experiences. The experience with my grandmother definitely informed how I look at artists and some elements that I want to bring out, but I had to approach this in a completely different way. It took a lot of time to gain that trust and to be become a part of his life and be with his family to a point where I wouldn’t be noticed anymore and everyone felt comfortable. It happened pretty organically. I think now I’m able to be invisible in a space, but it’s been a very humbling journey.

LC: You must have a bit of an outsider understanding because as an in your own experience as a queer female filmmaker and visual artist. Being an outsider, hopefully offered a way to understand another outsider, however more dramatic his experience has been.

RRB: For sure, and there were a lot of elements that I connected to with George, like we both studied at an art academy, myself at the Film Academy, and for George, it was the Florence Academy of Art. Those were experiences that were very enriching to our careers, but also took our intuitive way of making away, because everything is so cerebral. I had to find myself as a filmmaker again, and for George as well, he had to get rid of some of the structures of what he was taught. In those art academies sometimes you are following outside direction instead of the inner voice. So we have to get back to asking what do we want to bring out into this world? That’s something we had in common. Also, it’s my first film, and for him, it’s his first time presenting his artwork to the world, so to have this sense of almost an imposter syndrome, that’s something that was relatable for the both of us.

Still, though I empathize and try to gain as much understanding and awareness as I can but I can’t possibly compare my experiences as a queer cis gendered white woman from Europe to the exclusion Black people and people of color experience in this country.

LC: Can you specifically talk about a few ways in which you collaborated with George in telling his story?

RRB: For sure. In the beginning, we just talked a lot for hours and hours about his life’s experiences, about finding his place in the tradition of classical art. I think whatever he went through, we discussed it, so it really was like building this level of trust, but also for me to understand who he is as an artist, as a storyteller, and as a human being. For him, as a white European filmmaker, there were many things that I couldn’t speak to yet, so he really brought me into his life, opened up his whole world to me, and taught me about the many ways in which his life’s experiences, his art, and his being, how they were tied to the injustice, the racism, the institutionalized poverty, and mass incarceration in this country. As a white filmmaker, these collaborations, not only with George, but also with the rest of our team, have been of tremendous importance to have all these perspectives come together to create the layered story and film that it currently is.

LC: What in particular moved you about George’s story, both as an artist, and as a black man working to find a voice in the art world, and what has stayed with you?

RRB: His resilience, for sure, and for him to keep believing in his inner light. Even though he had all the odds stacked up against him. To really go on this healing journey, while being filmed, that was truly humbling for me, that he allowed us to be present in his therapies, addressing the taboos around mental health.

LC: In the film, there is a very strong arc wherein George realizes, accepts, and let’s go of some of his anger around his generational trauma that he realized he’d been carrying around a long time. Can you talk about how that was able to be captured onscreen?

RRB: It was definitely something that happened organically, and of course, we used editing to enhance that arc, but we had been filming him for almost four years, though not consistently of course, and witnessed his transformation and his healing, which has been a healing process for everyone working on this film, I think, because that happened chronologically. We filmed George going back to his hometown, dealing with his family members, and going through all these emotions of feeling so much love for them, and dignifying them through their portraits, but at the same time also being hurt by the discoveries that result from the intergenerational trauma in his family because of racism and social injustices. That was really an arc that came out organically.

LC: It’s beautiful, and it’s what makes the film so watchable and really inspiring. The film is so important in terms of shining a light on one man that examples one of the 1 in 3 Black men incarcerated in their lifetime in the US. It is also bringing awareness to the talents of one man who is finding a way to not only rise above the time he lost, but finding inspiration and growth as an artist. Why should people see this film, and what are you hoping this film will do for those who watch it?

RRB: As you said, this is one story about an extraordinary human being, but it shows us how much potential is behind bars, and how much potential is thrown away by a society that treats Black people as disposable. I think even though George has so many odds against him, he keeps finding that inner strength, and stands up to tell the things that he wanted to be told as a little boy to the next generation. It’s also important to bring awareness to mass incarceration, and the cycle of systemic racism that his family, and so many other families are in. They are trying to break that cycle, and are challenged by the difficulties that come with trying to break that cycle, and really create hope and a new way to approach the future so that generations going forward can look at themselves differently than they have been portrayed by society.