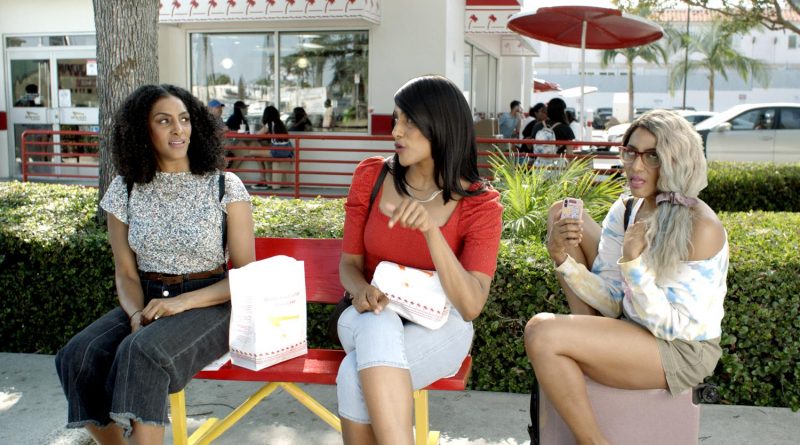 As a hybrid documentary, Sell/Buy/Date is one freaky little non-movie, or what ‘I-can-do-it-all’ poster gal, writer/director/producer/performer Sarah Jones calls an ‘unorthodoc’. Sell/Buy/Date considers how the sex industry is at the intersection of race, feminism, power, and money, through the lens of one Black woman with many voices seeking to better understand sex work. The Tony Award-winning playwright and performer made her first splash with her one-woman play Bridge and Tunnel, for which she won a a Special Tony Award in 2006. Growing up, she was inspired by Lily Tomlin, John Leguizamo, and Tracy Ullman. As an actress, she recently co-starred in the Netflix dramedy series On the Verge, and appeared in Marriage Story and Broad City. Now she is interpreting for the big screen what started out as the one-woman play Sell/Buy/Date, which was a show inspired by the real-life experiences of people affected by the sex industry.

Those savvy about the stage play will find the film considerably altered. Instead of the entirety of the story being delivered by the collection of finely crafted characters created by Jones, she uses herself and four of her favorite characters to serve as hosts on a journey in which she interviews members of the sex work industry about their experience, and considers various perspectives on decriminalization of sex work in the US and around the world. The film, which is part scripted narrative, part documentary, shows Jones grappling with the controversy in which she was called out for representing perspectives as a civilian on the outside, effectively leaving those living as sex workers outside the conversation. That kerfuffle led to several people, including Laverne Cox, departing the project. Since historically representations of sex work in film and tv have been far removed from the reality of the experience, in order to make a fair, considered film, it was essential for Jones to give voice to real people inside of and directly impacted by the industry.

When we get to the interviews with women of color, things get less effusive about decriminalization. Jones goes to Las Vegas, where she meets trans activist and sex worker Esperanza Fonseca. She talks about the violence inherent to the industry, and the fact that there is no protection for those in the field, adding that four of her friends have died in hotel rooms just like the one in which the interview is taking place. She goes on to say that most women in the sex trade are living in extreme poverty, and if they get out of the business, it doesn’t happen by raising enough money through sex work. She contends that decriminalization doesn’t make it safer for women, as exampled by the violence experienced in parts of the world in which sex work is legal.

Jones then travels into the desert and meets with three indigenous women who have experience with the business, Jennifer Marley, Becki Jones, and Terria Xo. They are very clear that decriminalization only allows for greater abuses and fetishization of women of color around the world. Countries create looser laws in hopes of an cash influx through white sex tourists, first world men lured by promises of sex with ‘exotic’ or 3rd world women. Through these interviews it because clearer and clearer the lines between those for decriminalization and enforcement of laws against sex trafficking and sex work are drawn between white folks, who are often in control, and people of color, who are more often economically disadvantaged. We’re left with the question, “How can we have a healthy relationship with sex without exploitation when those being exploited are without power or economic autonomy?”

There are aspects of the film that get to the heart of why Jones began this inquiry in the first place, not least through her experience of losing her 18 year old younger sister Naomi to a heroine overdose. A transactional relationship with a much older man led to Naomi’s experimentation with the drug.

Ultimately, Jones makes up her own mind about the sex industry, and as a viewer, you will too. Perhaps Jones speaking to, of all people, Bryan Cranston, about his own experience with the sex industry will sway you. At the very least, your love for the actor will be reaffirmed as he consoles Jones about her sister and speaks frankly about his own history.

Sell/Buy/Date is a bit of a strange hybrid of narrative and objective documentary styles that sometimes makes it unclear how much of the film is scripted. However, it offers new and compelling information about a subject too few are willing to consider and take on in any substantive way. It also shows the openheartedness and many talents of Sarah Jones, who deserves to be known around the world for her any or all of her many hyphenates.