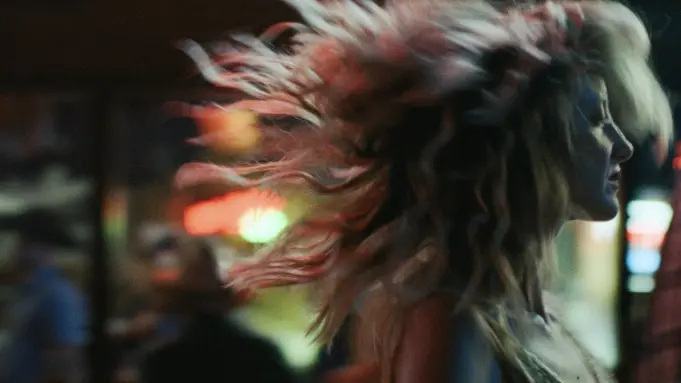 If Andrea Riseborough’s range as a performer was ever in doubt – although really, how could it be – one need look no further than her recent 2022 efforts, Amanda Kramer’s Please Baby Please and Michael Morris’s To Leslie, to put those suspicions well and truly to rest. As far away from the camp, hyper-excessive mania of Kramer’s work as can be imagined, To Leslie likewise pivots around RIseborough’s performance but that is very much where the similarities end. With its recent world premiere at Austin’s SXSW, in To Leslie Riseborough presents the rough and tumble of the film’s eponymous character with a tender and sensitive rawness and authenticity.

Opening to the heart-tugging sounds of Dolly Parton’s “Here I Am”, we learn that struggling Texan single mum Leslie had won $190,000 in the lottery. Beaming in the archival TV news footage with which the film begins, she’s a party girl looking for somewhere to happen and seems to have found her ticket out. Six years later, however, the money has run out, as has Leslie’s luck. Out of cash and thrown out of the cheap hotel where she has been living, she seeks support from her now adult son James (Owen Teague), but he has only one rule: no drinking. Unable to hold up her side of the deal and with nowhere else to go, it is only through the kindness of local motel manager Sweeney (Marc Maron) that Leslie gets one last chance. That she blows this one too, however, seems inevitable.

Riseborough’s performance as the alcoholic Leslie whose burned through more “one last chance” opportunities than even she herself would admit she deserved very much carries the film. As a platform to display Riseborough’s acting chops, To Leslie is a key entry in a filmography that is only going from strength to strength. With Riseborough, this film is capital S “Something” alright, focusing as it does with razor sharp precision on questions of shame, class and redemption. As a film, however, it is probably overly long, but as a showcase of Riseborough’s talents, it’s barely long enough, and it is solely her involvement that makes To Leslie so much more than the “social issue of the week” film it otherwise would be without her.