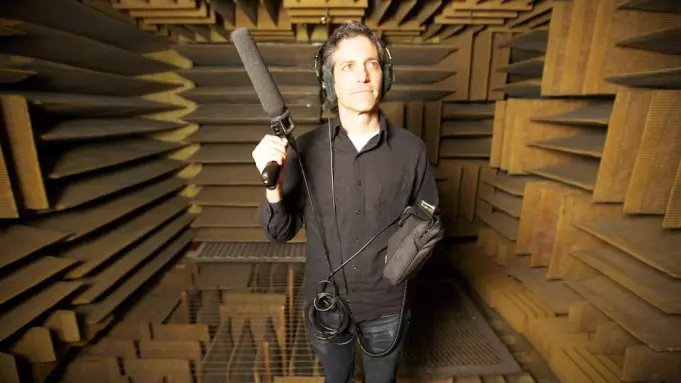 Calling 32 Sounds a documentary doesn’t do it justice. Playing at the 2022 SXSW Film Festival, this film is an enjoyably interactive and thoughtful exploration of sound, how it triggers emotions and transports us through memory.

Inspired by 1993’s Thirty-Two Short Films About Glenn Gould, the film has the loose feel of a project that director Sam Green noodled around with as the mood struck—which seems appropriate for the subject and his execution. Although Green’s recent films such as 2018’s A Thousand Thoughts focus on musicians and live performances, 32 Sounds is a more inward journey, aiming to immerse viewers in an experience.

That might sound heady—or like a theme park ride—but the experimental tone is part of the fun. Green encourages wearing headphones (no problem when watching online). He also signals when viewers should close their eyes, or get up and dance (an unexpected intermission I didn’t mind at all).

The spark for Green’s curiosity is a box of old cassette tapes he found in the closet with voicemails and other messages, some from people he loves who are now gone. Although he naturally links sound and film—he has silent aerial footage of a tree falling in a forest—he keeps pondering sound as a way to understand time.

The first sound he shares is a heartbeat from the womb that a midwife recorded. Our sense of sound develops before we’re born, he says, connecting us to the world.

Sound enters our ears, vibrates three tiny bones, and transforms into an electrical signal that the brain associates with an object or a memory—a quick science overview illustrated through a silly educational film from decades ago. “It’s an incredible miracle this all works,” Green says, adding that Thomas Edison’s phonograph astonished people because they could hear the voices of the dead.

Green’s aural rabbit hole hits a few odd notes, such as a visit with friend Nehanda Abiodun in Cuba before her death in 2019, filming her dancing to a mixtape he made her. While that experience is relatable, his revelation that she’s a fugitive who was a black nationalist in the 1970s might take viewers out of the moment. (Green covered radical 1970s activists in his 2002 film The Weather Underground.)

Likewise, the five-minute dancing interlude inspired by DJs and a New York neighbor whose stereo rattles the windows includes a montage of various people dancing, including some men briefly nude.

Yet more moments in 32 Sounds work than not, encompassing both a jet engine’s roar and the hush of falling snow. I was thrilled that Green spoke with sound artist Christine Sun Kim, who is deaf. She signs about feeling the vibrations of the New York City subway announcer’s voice in her pockets and how sound to her is more than “hearing people’s expectations.” It’s a part of her life, social currency, and a way to empower herself.

He also captures some lovely scenes with Annea Lockwood, a composer who recorded compositions of breaking glass and a piano burning in the 1960s. Now in her ’80s, Lockwood puts a smile of wonder on Green’s face when she gives him her headphones to hear the river’s current. She speaks of “listening with” the environment instead of “listening to,” a splendid subtlety.

He also picks the right times for reflective listening, such as a visit to the British Library’s sound archive. We close our eyes as a curator plays the most poetic and sad sound she knows: the only bird of its kind in the world, singing a mating call unanswered in the rain. So much feeling in such a small voice.