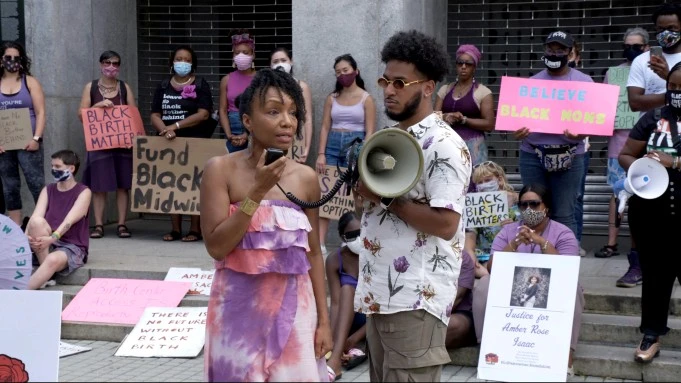 Watching the documentary Aftershock stirs a mix of emotions. Shock that the United States has the highest maternal mortality rate of industrialized countries. Heartache over families who lost moms much too soon—and outrage that black women bear a higher risk of dying.

Directors Paula Eiselt (93Queen) and Tonya Lewis Lee dole out this gut-punch patiently, starting with two New York City fathers who lost their partners either in the emergency room or mere weeks after giving birth. The documentary, shown at the 2022 SXSW Film Festival, has a feel of immediacy, following the fathers’ growing activism months after their loved ones’ deaths.

Omari Maynard reached out to Bruce McIntyre after learning of McIntyre’s situation through the news. McIntyre’s partner, Amber Rose Isaac, died on the operating table after delivering their son through a Cesarean section. Isaac had complained for months of shortness of breath and headaches, which her doctor dismissed as typical pregnancy woes. McIntyre consulted with a midwife, who reviewed the woman’s medical records and told the couple to rush to the hospital.

Isaac’s platelets, which help the blood to clot, had been dropping for months, leaving her with a life-threatening condition called HELLP syndrome, McIntyre said. She died during the surgery soon after tweeting in April 2020 about the hospital’s incompetence. Her baby boy was healthy.

Maynard’s partner, Shamony Gibson, 30, also delivered a son but died of a pulmonary embolism roughly two weeks after her Cesarean section. The two bereaved fathers soon found other dads who similarly had lost loved ones.

Aftershock unfolds like a procedural, from interviews with family members and experts along with footage shot at meetings and demonstrations as the fathers’ momentum grows. Another father, Charles Johnson, says he feels like he failed to protect his wife, Kira, who died of internal bleeding after delivering their son. Yet he also felt like he didn’t have the “latitude” to act as an upset and frustrated white father would. The moment he raises his voice, he says, “I’m no longer a patient concerned about his wife. I’m perceived as a threat.”

Aftershock takes viewers through an abbreviated history of gynecology, with racism intrinsic in examinations of and procedures on black slaves, and reveals astonishing statistics. Nationwide, C-sections have grown from about 6% in 1970 to 32% in 2019. Black mothers’ mortality rates likewise have grown, doubling from 22% in 1995 to 44% in 2019.

Part of the problem is the industrialization of medicine—it’s quicker to perform a Cesarean section than a vaginal delivery but also more lucrative for hospitals, which can receive a greater insurance payout for this surgery, the film notes.

While that alone creates a troubling incentive, Dr. Neel Shah, an obstetrics and gynecology professor at the Harvard School of Medicine, also walks through diagnostic software that automatically rates a black patient’s odds for different procedures, regardless of their health.

“I started thinking about my own practice and how really well-intended people can be doing racist things,” he says.

Aftershock juxtaposes Shah’s efforts in Tulsa with the momentum the fathers build through “birth justice” rallies with other relatives, such as Gibson’s mother, Shawnee Benton-Gibson. A firebrand, she speaks on sidewalks, at a New York City council hearing, and at a huge gathering at the Lincoln Memorial’s reflecting pool, advocating to eliminate these health disparities.

Black lives matter, she says, but black wombs matter too.

Ultimately, the film’s message is what McIntyre wanted for his beloved: to be seen and heard. The strong bond he and the other dads develop brings that home. From Maynard painting portraits of the moms to video chats for their children’s birthdays, they’re there for each other.