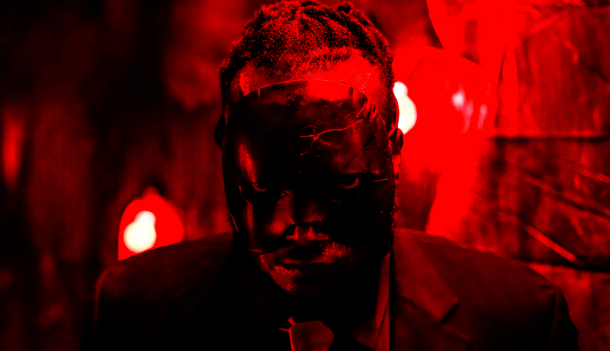 Introduced by Candyman legend Tony Todd proving once and for all that he truly is the Vincent Price of Black horror, Bitch Ass brings a new twist to the vibe of contemporary horror franchises like Saw by adding something altogether fresh to the equation with its echoes of the great British horror films of yore a la Amicus and the like. Set in 1999, the film follows a group of four young people who are sent on a gang initiation to rob a local house where they have been told the rich, elderly owner has died. After breaking in, however, they discover her son is very much alive, and wanting to play his own game. Flashing back to 1980, this son is revealed to be Cecil (Tunde Laleye) – the “Bitch Ass” of the title – and as his story across those years unfolds, one of the aspiring gang members Q (Teon Kelley) discovers that his own mother played a pivotal role in Cecil’s story.

With its elaborate horror set pieces themed around Cecil’s enduring love of board games, Bitch Ass is a lot of fun and offers enough twists and turns as it moves from kill to kill to keep things interesting. With its all-Black cast and co-written and directed by Bill Posley, Bitch Ass is also very clearly proud of its status as a Black horror film, yet has no interest in simply rehashing the blockbuster success of something like Jordan Peele’s Get Out; this is its own film, and very clearly doing its own thing. Displaying a deep affection for the slasher subgenre and its mysterious masked killers in particular, the way that Bitch Ass plays with those expectations as the character of Cecil comes increasingly to the fore is clever enough to be interesting, but never preachy enough to feel pompous and it’s a nice balance. This is a horror movie that wants to be fun, and fun it is.

With standout production design by Jeremy Jonathan White and cinematography by Steven Parker, Bitch Ass excels as an immersive horror film where, although its tongue is planted firmly in its cheek, still clearly delights in setting up its complicated and at times comically macabre murder scenarios. The storyline is compelling enough, the characters and their journeys fleshed out to the point that there is enough reason to care what happens to them, but where Bitch Ass flourishes the most is just how gleefully it embraces the slasher movie’s love of death. There is an affection for genre filmmaking here that is so pure that it’s difficult for the film not to be charming in its own deeply demented, satisfying way.