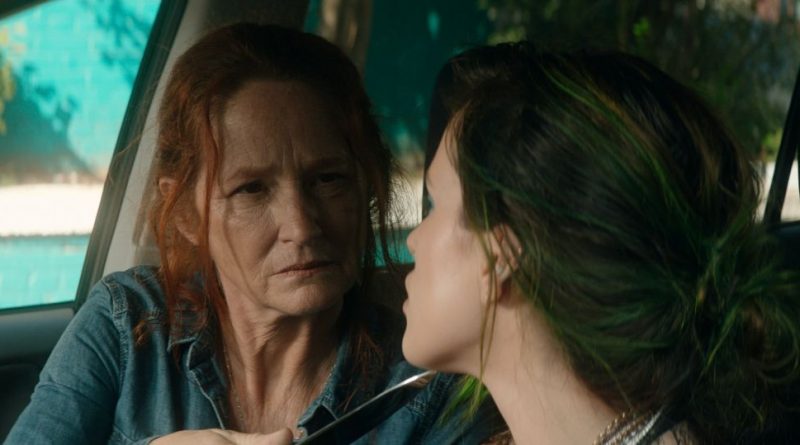 That could be because you are Lillian Cooper. You’ve spent you life acting, play-acting, performing. Right now, Lillian Cooper is playing the part of Lady Macbeth in Shakespeare’s Scottish play. This role is to be her last on stage. Lillian Cooper’s well-known, well-lit name is hugely displayed on the theater’s marquee.

In art, she would still like to play Portia because “she swallows fire and burns from the inside.” In life, she welcomed her son Jake home from rehab. He is famous in his own right, a singer for the band Red Drum. When he arrives, she hovers protectively. He pleads with her: “You gotta start trusting me at some point, Mom.” In life now, after his death, she is a grieving, revengeful mother playing a queen.

Mom is played excellently well by Melissa Leo (Frozen River), her hair as red as a canna blossom, her face a mask and a mirror. When Lillian says “thank you” to her son’s drug dealer, it is master lesson in the craft of acting for Lillian — and for Leo. Lillian’s son’s drug dealer is played cagily by Bella Thorne.

The plot, written by Kenny Walakandou, is suffused with intricacies, double meanings, and foreshadows. The film, directed by Peyfa, exhibits a masterful use of flashbacks, in particular scenes from Lillian’s famous roles, in The Scarlet Letter and Hamlet, for example, with allusions to literature that include Edgar Allen Poe. Lines from the plays spider in and out of Lillian’s mind.

Credit for the film’s good lighting, especially on dark faces on dark nights, goes to Diana Butti’s cinematography. Measure for Revenge was efficiently edited — note the time-clamping jump from a phone ringing to a restaurant. To add dimension to the text, Peyfa exploits panes of glass, blades of knives, and mirrors that reflect faces or refract them.

Measure of Revenge almost demands a second viewing to catch all the lines and allusions. It helps to have done your homework.