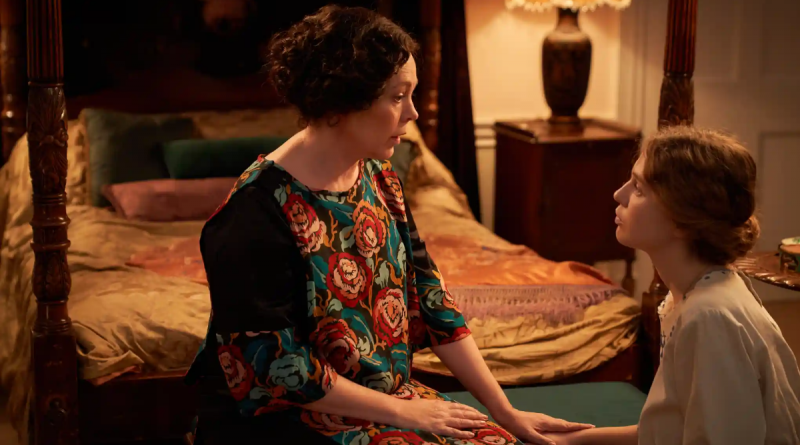 A marriage of convenience proves inconvenient when Paul, a son of society, and Jane, a maid, fall in love against the rules of 1920s England. The tragic reality of postwar times, sons lost and promising futures destroyed, prominent families fake smile through another lunch together keeping up appearances. But, death and suffering are inescapable. Mothering Sunday is a story of love and loss through the decades.

Clever transitions feature select words, highlighted by the soft sound of a pencil to paper, writing them in cursive across a page, reminding us that we’re listening to Jane’s retelling of history. The dialogue has a poetic and literary rhythm, giving Jane a flourish in her recounting.

Olivia Colman plays Mrs. Nivens with unapologetic emotion. Assuming her curt responses stem from boredom would be a mistake. Colin Firth is Mr. Niven, a lovely-tempered man consumed by death. Firth is gentle, seeming less concerned with class than others. His encouraging spirit is an unspoken inspiration for Jane. Josh O’Connor is a dashing Paul. Romantic yet realistic, he worships Jane. Adoration and care were written all over O’Connor’s face and heard in his words. It’s a nice departure for American audiences who know him from his role as young Prince Charles in The Crown.

Odessa Young plays dual roles in Jane. The 20s version with genuine innocence, and the older, wiser version in the middle of writing our story. The complexity of this role comes from a myriad of places. Jane is an orphan, her affair a secret, and unable to openly express her sadness, she must forge ahead with a newfound hardness. Jane, the established author, is determined to accomplish her goals yet still very much vulnerable to love and loss. It’s quite the turn from Young.

The period sets and costumes are immaculate. Thoughtfully placed sounds and images repeating between times have weight. Bibliophiles and writers will revel in the use and reverence of words. It does feel as if we’re reading the pages of Graham Swift’s original novel. Screenwriter Alice Birch’s adaptation is breathtaking. Alongside director Eva Husson, Mothering Sunday is a meditation on grief and the choice to thrive. It is one of the best films of the year.

EDITOR’S NOTE:MOTHERING SUNDAY is AWFJ’s Movie of the Week for March 25, 2022.