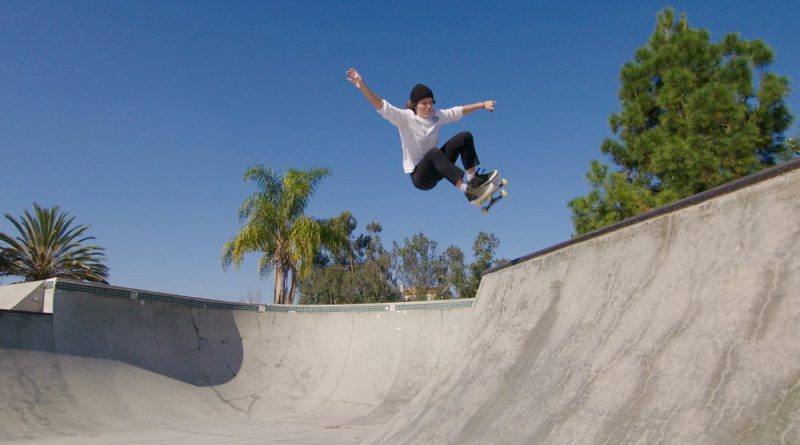 Anyone who thinks women have equality can look to continued the lawsuits and struggles for acceptance for equal pay in the sports world. It can be really depressing. Those who need a jolt of positivity can watch the new documentary Skate Dreams, the first film ever made about the rise of women’s skateboarding. It features profiles on successful female skateboarders and shows the trajectory from hopefuls around the world doing it for themselves in the 80s and 90s to their representation at the Tokyo Olympics. Skate Dreams is directed by Peabody Award-winning director Jessica Edwards, and boasts a list of below-the-line talent made up almost exclusively of women.

Among those profiled are US Women’s Olympic Skateboarding coach Mimi Knoop. Americans Nicole Hause, Nora Vasconcellos and Jessica Bailey are also featured, as is Cambodian Kouv “Tin” Chansangva. The film shows a powerful subculture of girls learning and excelling at skateboarding that has been growing since the 80s. Major players early in the development of the sport are Mimi Knoop, Lisa Whitaker, and Cara-Beth Burnside. Burnside was the first woman to appear on the cover of Thrasher Magazine in 1989, at a time when, ironically, she could only make money through a parallel career in snowboarding. Knoop and Burnside instituted a boycott at the 2005 X-Games that led to greater inclusion for women in the sport. Lisa Whitaker was filming girls skateboarding over 20 years ago, and started a website called Girls Skate Network, which exposed folks on the internet to the power and skill of female skateboarders, and led to an increased interest for girls taking up the sport around the world.

Of the newer guard, Nora Vasconcellos stands out as building a particularly successful pro career. Her name is on all the elements of her skateboard, with sponsorships that include June Shine, Stance Socks, and Hume, and was the first female to sign on the Adidas skateboarding program.

In Phnom Penh, Kouv “Tin” Chansangva is making a difference to girls who skate as General Manager of Skateistan Cambodia. She started skateboarding herself as a student at Skateistan. Tin became the first in her family to finish school, and now handles a staff of 11 while overseeing the training of more than 200 kids. She now helps scores of Cambodian girls learn to skate. In the film, she talks about how skateboarding has been empowering for her, a shy girl from an impoverished family. It has changed her life, and says now she wants to do the same for young girls discovering the sport.

Director Edwards is aided telling these stories by editor Maya Tippett, director of photography Jenni Morello, and composer Arianna Gil, and all these below-the-line talents add to the film immeasurably. Though the arc of Skate Dreams starts when women were paid a fraction of what male skateboarders were awarded at competitions, Edwards ends on the high note of showing female skateboarders, take part in the 2020 Olympics in Japan, led by former champion Knoop. The film is a reminder that it only takes a few loud and proud women performing in a male-dominated sport or activity to open it up to the other 50% of the world’s population.