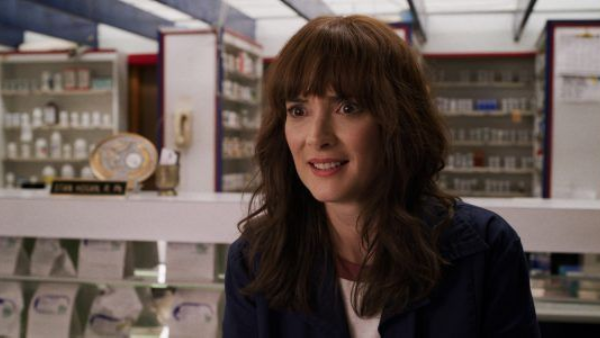 If there’s a faster way to get an audience on side than casting our beloved Winona Ryder as the long-suffering girlfriend of a loser guy, watching The Cow I struggle to imagine what that could be. Ryder plays Kath, a delicate, quiet soul who loves gardening and, somewhat bewilderingly, her manchild stoner boyfriend, Max (John Gallagher Jr.). Travelling for a weekend getaway in an isolated cabin, the couple’s plans are thrown askew when they arrive and discover another couple, Al (Owen Teague) and Greta (Brianne Tju) are already there. Somewhat awkwardly accepting the invitation to spend the night there as well until they can figure out what to do, Kath awakens the next morning to find that Max and Greta have run off together. And from here, things only get stranger.

Co-written and directed by Eli Horowitz, The Cow flips between present and past to unpack Kath and Max’s stories. Revealing the details of these beyond the film’s set up risks spoiling the fun, and good golly, what fun it is. Joined by Dermot Mulroney who plays the owner of the country home and who joins Kath on her investigation, The Cow brings together the power of a strong cast with a compelling screenplay to deliver a one-two punch of a cinematic experience that delves into mystery terrain, albeit while keeping true to its dark and increasingly twisted sense of humour.

Structured as much around tensions between city and country as it is past and present, The Cow is one of those deeply complex films that through the joint powers of its collaborators both in front and behind the camera somehow manages to make it all look very easy indeed. Whether the twist works – and oh boy, what a twist it is – will ultimately be up to the taste preferences of the given viewer, but there is no doubt that the set up alone makes this film well worth the ride alone. Once again proving that the long-awaited Winona Ryder renaissance is well and truly here, The Cow is regardless so much more than a star vehicle.