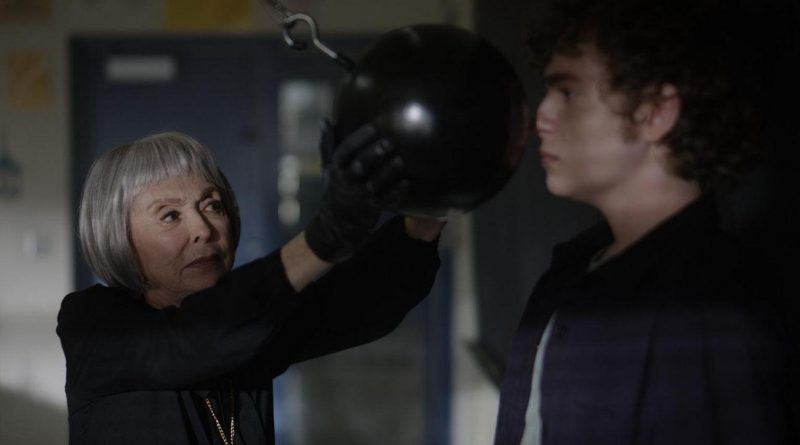 It’s crunch time for undisguised nerdlinger Ben (Connor Kalopsis), a high school student on the cusp of midterms who feels his whole future is riding on the results. Focused solely on getting into the college of his dreams, it is his best friend Mei (Ramona Young), an adorable slob, who keeps him grounded – well, up to a point. When their high school’s broadly loathed and notoriously mean-spirited physics teacher Mrs Wheeler (Rita Moreno) casually seeks to thwart Ben’s ambitions, Mei decides it’s time to pull the prank of the title, using her mad hacker skillz to frame the hated teacher for murder. But the plan, it seems, works better than they expected…

A sweet little gumdrop of a film with a deliberately bitter aftertaste, The Prank is the charming black comedy revenge fantasy we need right now. While the plot may be too OTT for some, it is surely these very excesses that make the film the wild ride that it is as it puts the casual cruelty of youth in its crosshairs. The Prank is far from didactic, however, and director Maureen Bharoocha does an impressive job creating an immersive world where the slights of adolescence sting oh-so sharply, and the fleeting yet all-encompassing irrationality of the moment seems to somehow make sense.

Kalopsis and Young are the heartbeat of the film as Ben and Mei, and the quality of the banter between the two is filled with authenticity and heart. But it is, perhaps unsurprisingly, the great Rita Moreno who makes The Prank something truly unforgettable, brimming with a stern-yet-sassy sex appeal that women literally a third of her age would envy. The film’s support cast are easy to get lost in the shadow of Moreno’s unwavering grandness, but it is the quality of performers like Betsy Sodaro as one of Mrs Wheeler’s teaching colleagues who further solidify the foundations. A teen film for people who have forgotten how much fun teen films can be, The Prank is a delight.